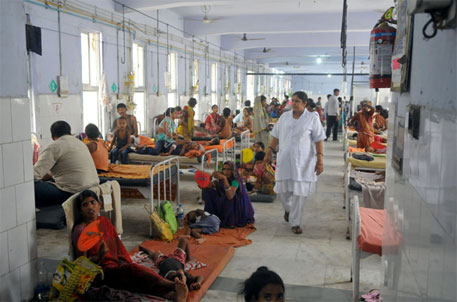 The government's focus on improving health indicators stated in the Millennium Development Goals (MDGs) has worked against the aims of universal health coverage, said experts at the National Convention on Union Budget 2015-16 held in Delhi on January 8 and 9. They recommended that the focus must shift towards comprehensive health policies rather than specific issues.

"Because of this focus, we have specific programmes like those on maternal health and infant mortality. But we need to meet the needs of all problems that women face. MDGs have fragmented health policy. We are asking for a comprehensive framework," said Ravi Duggal from the Indian arm of US-based non-profit International Budget Partnership.

The document “Policy Asks and Expectations from Union Budget 2015-16”, presented by Indian civil society organisation People's Budget Initiative, states that addressing the shortage of staff in the health sector must be top priority. According to the 12th Five Year Plan document, India faces a 76 per cent shortage of doctors in the public sector and an 88 per cent shortage of specialists in government facilities. The shortage of community health centres is placed at 37 per cent. (See box)

The document also demands an improvement in the extent and quality of fund utilisation under the National Health Mission. A joint study by Madhya Pradesh-based Sanket Development Group and Delhi-based Centre for Budget and Governance Accountability found that in Chhattisgarh, large sums of money have been lying unspent since the launch of National Rural Health Mission (NRHM) in 2005. The amount of unspent money ranged from Rs 380 crore to Rs 1,220 crore annually till 2012.

The need for improving access to generic medicines and strengthening of the Jan Aushadhi scheme was also highlighted. The policy document included the long-standing demand that health be brought under the concurrent list. As many schemes like NRHM are funded by the Centre but implemented by the states, delivery of health services is not effectively streamlined, noted the policy document.