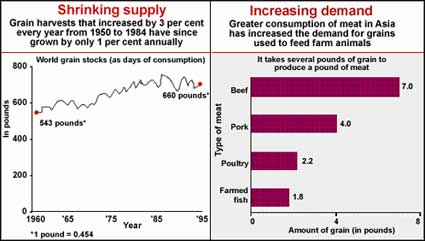 As of 1997, the world consumes five million tonnes of grain daily. To feed the world's human population of almost 5.8 billion - growing by 80 million people a year - production of foodgrains, including wheat, rice, corn and barley, has to increase by 26 million tonnes annually. However, grain production, which had risen steadily for decades, has slowed down. The Worldwatch Institute warns that this trend may usher in an era of scarcity. It says that rising prices may hit people hard in the developing world. The reasons for this scarcity could be loss of agricultural land to urbanisation, water scarcity and lack of significant developments in farming techniques, and genetic engineering.