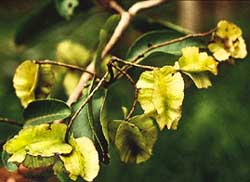 Different parts of the tree have been used in traditional medicine to treat ailments like rheumatism, haemorrhage and skin diseases. Recent research has shown that compounds isolated from the tree can help fight hiv and cancer.

The tree is found along the western coast of India (in states such as Maharashtra, Orissa and Tamil Nadu). The researchers decided to work on the tree as they found it was being indiscriminately cut by the local fisherfolk to make boats and furniture owing to its anti-termite property. The scientists say availability of the tree is already less due to low rate of germination and seeds being washed off the shore. "We have made this effort as the local people do not understand the importance of the tree and are not keen on its cultivation," says S R Thengane of ncl.

To propagate the tree, the scientists collected mature fruits and extracted the seeds from the hard cover. They grew these seeds in vitro . Germinated seedlings were then successfully planted in the university campus. The technique holds a high regeneration potential for the tree. Thengane said they look forward to collaborating with pharmaceutical companies and interested organisations for large-scale propagation of this medico-economic tree.