An ice-free Arctic Ocean during the summer might be reached this century, say experts

The length of the melt season for Arctic sea ice is growing by several days each decade, says a new study by National Snow and Ice Data Center (NSIDC) of the US and NASA researchers.

The report, recently published in Geophysical Research Letters, also says that an earlier start to the melt season is allowing the Arctic Ocean to absorb enough additional solar radiation in some places to melt as much as four feet of the Arctic ice cap’s thickness. 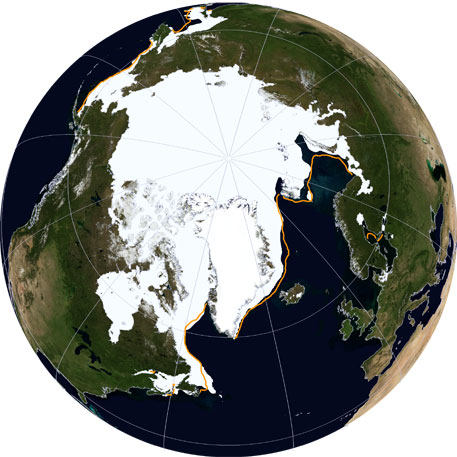 “The Arctic is warming and this is causing the melt season to last longer," said Julienne Stroeve, senior scientist at NSIDC, Boulder and lead author of the new study, which has been accepted for publication in Geophysical Research Letters.

The study also says that the sea ice cover is shrinking and thinning, making scientists think an ice-free Arctic Ocean during the summer might be reached this century.

Despite large regional variations in the beginning and end of the melt season, the Arctic melt season has lengthened on average by five days per decade from 1979 to 2013, says the study. (Read 2001-2010: Hottest decade with climate extremes)

That downward trend reflects Arctic climate change, but the causes of yearly variations around the trend are harder to pin down,” said Lawrence Hamilton, co-author and researcher at the University of New Hampshire, US. “This collection of forecasts from many different sources highlights where they do well, and where more work is needed.”

The report that says that summer ice extent remains hard to predict has advocated a growing need for reliable sea ice predictions.