Biodiversity in the UK threatened due to climate changes 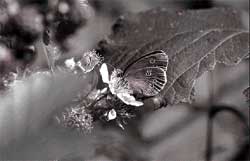 current forecasts of climate change for 2050 suggest a significant adverse effect on flora and fauna species and habitats in the uk. This was the finding of an extensive study that used computer modelling and observation for assessing impacts of climate change on 50 species of the country. The study was conducted by the uk Climate Impacts Programme with the help of several English, Welsh, Scottish and Northern Irish environment agencies and non-governmental organisations like the Royal Society for the Protection of Birds. "It is clear that changes are occurring and at a rate beyond the capacity of many natural systems to respond without human assistance," note the researchers in their report, Climate Change and UK Nature Conservation: A Review of the Impact of Climate Change on UK Species and Habitat Conservation Policy.

The mountain ringlet butterfly, which at present inhabits the Lake district of the mountainous area of Scotland, will become extinct irrespective of any efforts to conserve the species. The study attributes this to the loss of suitable habitat as a result of climate change. Another species that will be most adversely affected is the capercaillie, a bird. At least 99 per cent of its Scottish highland habitat is expected to degrade by 2050. As warming leads to drying up of soils in summers, the beech trees are expected to disappear from the south of England and East Anglia. The same fate awaits the snow bunting, a bird that prefers colder climes. The study predicts that some species like the beech and natterjack toad will move northwards to colonise new areas.

Higher temperatures and increased dryness in the eastern and southern regions are not the only cause of trouble. More wet winters and increased extreme weather events like floods and droughts will also alter habitats. According to the study, southern summers will be 22 per cent more dry by 2050 while sea levels in south and east will rise by about 78 centimetres. Rising sea levels will cause widespread flooding of coastal habitats with curlews, dunlins and redshanks losing food resources. But the oyster catcher will gain from flooding. The habitats most sensitive to climate change impacts are montane habitats and raised bogs, which are vulnerable to loss of suitable climatic conditions.

To preserve wildlife, the study suggested schemes that could be used to provide buffer zones around protected areas or to assist species and habitats in moving to new sites by creating stepping-stones for them. However, such schemes have a limited function as they can protect birds and insects but are not of much use to most of the plants that are too slow to adapt to changes.