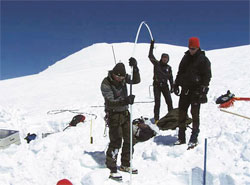 GLACIERS, reservoirs of fresh water on the earth, are assumed to be major indicators of climate change. Since their melting contributes to drinking water, water for agriculture and hydropower in densely populated regions in South and Central Asia, glaciers have become a major concern for these regions.

Himalayan glaciers are important as they feed 10 rivers that supply water to 20 per cent of the world’s population. Scientists are curious to know whether global warming is affecting all glaciers at the same rate. Diverse scientific studies and strategic approaches need to be taken into consideration to predict the current state and future evolution of Himalayan glaciers.

However, variable retreat rates and insufficient data on glacial mass-balance—the difference between the amount of snow collected during winter and the amount of snow melted during summer—make it challenging to develop a coherent picture of the impact of climate change.

In a study Dirk Scherler and his colleagues at University of Potsdam, Germany, proposed that the response of Himalayan glaciers to climate change varies significantly with several factors like surface steepness and degree of rock debris cover, besides climate uncertainty. Published in Nature Geoscience on January 23, their research revealed that nearly 50 per cent of the studied glaciers in the Karakoram region of northwestern Himalayas are either stable or advancing, whereas about 65 per cent are retreating elsewhere, such as in the Tibetan Plateau.

“So far the significance of debris cover and its impact on regional differences in the frontal dynamics of Himalayan glaciers has not been established on a mountain-belt scale,” said Scherler. The authors studied 286 mountain glaciers from 12 heavily ice-covered areas of the Greater Himalayas, by analysing remotely measured frontal changes and mean annual glacier-surface velocities.

They found that the mean glacier-surface movement between 2000 and 2008 ranged from retreating at the speed of 80 metres per year to advancing at the speed of 40 metres per year. There is no uniform response of glaciers to climate change. The glaciers of central Himalayas, which have high debris cover, have low retreat rates in comparison to the subdued landscapes of the Tibetan Plateau, where retreat rates are higher.

“During the advancing stage, the debris is brought down the valley by the glacier and during retreat they protect the ice below them, to some extent, from melting,” explained R K Chaujar, scientist, Wadia Institute of Himalayan Geology, Dehradun, Uttarakhand. “It is important to consider such parameters that may have been neglected so far in order to predict how fast certain glaciers are retreating and will retreat in the future to predict water availability or measure the global sea level. Just because some glaciers do not retreat (at their front) does not mean that they are in good condition,” Scherler added.