Mercury can lead to extinction of Arctic bird 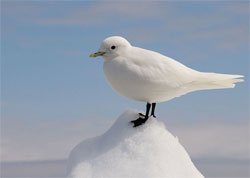 Mercury pollution has risen nearly 50-fold in the feathers of a breed of Arctic bird over the past 130 years, says a BBC report that quotes a few scientists.

The researchers, according to the report, analysed feather samples of the ivory gull (Pagophila eburnea) from the Canadian Arctic and western Greenland from 1877 to 2007. They found the bird had been exposed to mercury for decades. Scavenging on the carcasses of whales, seals and other mammals killed by predators such as polar bears was the primary source of mercury consumption.
Days before this, in January, the very rare Arctic bird was spotted in US' Quincy, bringing many bird watchers to the city.

Meanwhile, in a study published in PLOS One, it has been highlighted that since ivory gulls avoid flying over open water, scientists suggest birds may vary their migration route with the variations in sea ice formations. Breeding populations of the bird are presently found in Svalbard (Norway), Greenland (Denmark) and Russia [18], as well as the Canadian high Arctic.

"The ivory gull is an endangered seabird that spends its entire year in the Arctic environment. In the past three decades, threats from various sources have contributed to a 70 per cent decline in Canada," says the study.