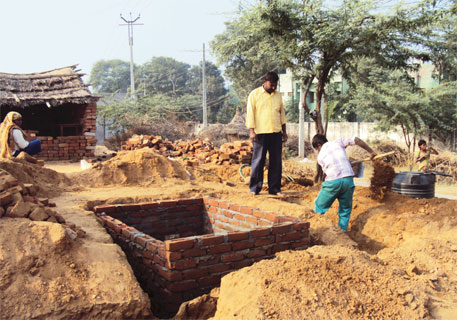 He also announced that UPA's flagship rural jobs programme, the Mahatma Gandhi National Rural Employment Guarantee Scheme (MGNREGS), would be de-linked from construction of individual household latrines (IHHLs). He made these announcements at a workshop and exhibition on innovation technology for sanitation and water quality in rural area in New Delhi.

By de-linking the sanitation mission from MGNREGS, the NDA government has reversed the decision of the previous Congress-led UPA government. In 2012, the then rural affairs minister, Jairam Ramesh, had taken the decision to link IHHL with MGNREGS. It helped to increase monetary incentive for improving sanitation. A large part of the subsidy for building toilets, Rs 5,500, came through this flagship programme. Ramesh had linked both schemes after complaints that the incentive under Nirmal Bharat Abhiyan (Rs 4,600), was not enough to construct toilets.

Did Gadkari increase or cut funds for toilets?
Confusion prevailed after Gadkari's announcement of de-linking MGNREGS from construction of IHHLs and increasing incentives for individual household latrines from Rs 10,000 to Rs 15,000.

After MGNREGS contribution is removed from IHHL, the  incentive amount under Nirmal Bharat Abhiyan would be only Rs 4,600. But Gadkari said the subsidy amount is being increased from Rs 10,000 to Rs 15,000.

No ministry official was willing to clarify what the minister meant—whether the incentive would be increased from Rs 4,600 to Rs 15,000 or whether the minister has some new plan to transfer funds from MGNREGS to the sanitation campaign.

Gadkari said his ministry is preparing cabinet note regarding all these changes.

Damning study findings
Meanwhile, a new study has been conducted in Madhya Pradesh to asses the impact of India's flagship programme, Total Sanitation Campaign (TSC). The study, released on Wednesday, said that health benefits can be achieved through the programme only if sanitation is improved on a large scale.

Started in 1999, the achievements under TSC are still far from satisfactory. According to Census 2011, India achieved 32 per cent rural sanitation. The figure was 22 per cent in 2001. The study was funded by Bill and Melinda Gates Foundation.

The researchers, led by Sumeet Patil from the School of Public Health, University of California at Berkeley, and the Network for Engineering and Economics Research and Management in Mumbai, India, conducted a cluster randomised controlled trial in 80 rural villages of Dhar and Khargone districts in Madhya Pradesh state to measure the effect of TSC (an initiative to increase access to improved sanitation throughout rural India) on household latrine availability, defecation behaviours, and child health. A total of 5,209 children aged under 5 years and 3,039 households were studied.

The study shows that the minuscule improvement of sanitation is not going to benefit at all. It is not going to help children in improving health outcomes like containing diarrhoea, parasite, infections and anaemia.