In 2010, Andhra Pradesh witnessed a series of suicides. These were not cases of farmers' suicides—a regular occurrence in the state which continues to be in the grip of an agrarian crisis. The victims in these cases happened to be the poorest of the poor; most of them illiterate dalits and adivasis. The first information reports (FIRs) of the police reveal that most of the suicides were due to coercive loan recovery tactics adopted by the mighty microfinance institutions (MFIs), that had given these people a few thousands of rupees as loans. Ironically, 2010 happened to be a year in which the micro finance industry registered a spectacular growth.

As many as 76 suicides, allegedly due to debt recovery-related harassment were reported that year in the state described as the microfinance capital of the country where one fourth of all the MFIs in the country are concentrated. Police cases were registered, many of them under the section 306 of the Indian Penal Code for abetment of suicide. It was pointed out that since the loans were insured, many of the victims were driven to suicide.

Now, one-and-a half years later, at least one third of the registered cases have been  closed by the police. Out of the 76 cases, police have closed 29 cases, despite filing many of them  under the section on abetting suicide. A circular issued on March 3 by B Rajsekhar, chief executive officer of the Society For Eradication of Rural Poverty (SERP), a wing of the State Rural Development Department, which focuses mainly on the improvement of livelihood of the rural poor,  points out that in many cases no proper investigation is taking place and chargesheets against the MFIs are yet to be filed.

At the time these cases were reported, the mainstream media, national as well as international, took a serious note of the issue. Everything related to the microfinance sector was analysed threadbare: how they targeted women’s self-help groups; their exorbitant interest rates ranging from 25-60 per cent; their coercive recovery methods; and finally, how the industry ended up in crisis because of the loss of the very lives it was supposed to uplift (see 'Profit from the poor').

The state then came up with a stringent legislation—The Andhra Pradesh Micro Finance Institutions (Regulation of Money lending) Act, 2010  for controlling the MFIs and protecting the rural women’s self-help groups. (See 'Who will bell the cat?')

While trying to take the reins in its hands to tackle MFIs, the state government left the victims in the lurch. It failed to reach out to the victims’ families which have become all the more vulnerable: a majority of those who took their own lives are men, and the poor women have been forced to shoulder the burden of the family all alone.

In the absence of financial as well as other supports from any quarters, many of the families of the victims have succumbed to the pressure from MFIs to compromise the cases for just a few thousand rupees.

Bujji’s complaint, which the police registered, says her husband ended his life by consuming pesticide because he was harassed by the recovery agents of the microfinance company. The police registered a case under section 306 of the IPC. But within two weeks, she changed her statement before the first class judicial magistrate.

According to the new statement, her husband came home drunk, picked up a quarrel and beat her. She left her home for her parents’ home and in her absence he committed suicide by taking pesticide.

The statement in English (which was read out to her in Telugu)  signed by her further says that the first complaint was drafted by a villager, and she did not know the contents of that complaint and “the employees of microfinance have nothing to do with this case.” 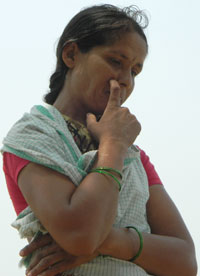 Her son, B Rajesh, a class VII student, her brother-in-law Banoth Cheena and a few more witnesses, too, have given the same statement that Venkanna committed suicide because of the quarrel he had with his wife and not because of the harassment by the MFI people.

Ask Bujji why she changed her earlier statement. “You tell me, what else I could do, when nobody was there to help me?” she asks. “ A case means losing many days work and wages. I have two school going kids; can I let them starve?”

She works as a farm hand and earns Rs 100-150 as daily wages. After her husband’s death she had to borrow money for his funeral and other expenses.   So when the village sarpanch and some others put pressure, she decided to accept the money the MFI offered her. “

MFI people  gave 80,000 rupees but I got only 25000. The rest was taken by others towards funeral expenses and loans I have taken from them.”.  In a third statement given to SERP, she has stated that she was ready to reopen the case. 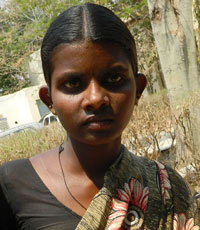 Sadula Jangamma, a 22-year-old wage labourer belonging to Buduga Jangalu (Scheduled  Caste) community, from Hajipalli village in Mahabubnagar district, stands nervously in the courtyard of the district court holding her little daughter Radhika close to her. Her husband Sadula Ramachandri's suicide case is coming up for hearing for the first time. Ramachandri committed suicide in December 2010 after he was allegedly harassed by the microfinance recovery agents of  Spandana Sphoorty Financial Limited, one of the largest microfinance institutions in the country.

The FIR says she had taken Rs 15,000 loan and repaid seven installments of Rs 1,100. But when the couple failed to repay two installments, the loan recovery agents came to their home abusing and threatening to lock the house and take away all their belongings and send them to jail. That night her husband consumed pesticide. The police registered an abetment to suicide case against D Vijayakumar, manager of Spandana, and D Subash Reddy, a loan recovery agent.

Spandana people have offered Rs 1 lakh to compromise the case, says Jangamma. But she is not ready to accept it since the case hearing has begun. “The day my husband committed suicide, we took his body to Spandana’s office and held a sit-in protest there,” says Jangamma. That time they had promised to give her Rs 1 lakh as compensation. “We’re ready to compromise but they didn’t keep their word,” she says. Suppose they offer more? “No”, she says emphatically. But the victim’s cousin and fourth witness in the case, who has the same name Sadula Ramachandri,  says if the company offers Rs 5 lakh the family may consider a compromise.

Apart from a monthly widow pension of Rs 200, Jangamma, who gets a pittance of Rs 50 for a day's work, has not received any financial help from the government. She has been promised a house under the housing schemes for the poor, but that is yet to be fulfilled.

In a belated effort, SERP is now trying to reach out to the families of the victims and support them to take forward their cases. “We hold regular meetings of our staff in all districts to review the situation,” says P Jamuna, SERP's director-advocacy. SERP is also trying to get the closed cases reopened. The March 3 circular says: “Since there is no proper investigations and filing of chargesheets against the MFIs, it has been decided that that the District Rural Development Agency should provide support to the Station House Officers (SHO) in getting the chargesheets filed in all the cases by reopening the cases wherever required by 26 March 2012.” It also requested the superintendents of police to issue directions to the SHOs to speed up the process of filing the chargesheets.

But every effort that SERP takes now to expedite fair investigation is challenged by the MFIs in the court. Even the internal circular of SERP was challenged by SKS Microfinance Limited, India’s only listed micro lender, even when the circular has not mentioned its name or that of any MFI. SKS, in its petition argued that SERP was trying to influence the investigation and prayed for suspension of the proceedings initiated by SERP.

While allowing interim suspension sought by SKS, the High Court said “if there are any crimes registered against the petitioner, this order will not preclude the respondents to proceed with the investigation in accordance with law.”
Web Specials Web Specials Web Specials Trident The Andhra Pradesh … Suicides Spandana Sphoorty … Society For … SKS Share BASIX Non-banking … Microfinance … loan recovery harassment Asmitha Andhra Pradesh 2010
SUPPORT US