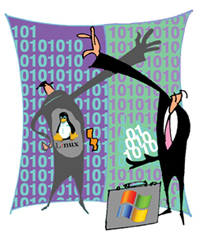 microsoft has accused Linux of patent violations. On may 14, 2007, Brad Smith, general counsel for Microsoft, told Fortune magazine that Linux, the open source operating system and other related softwares, have violated 235 of its patents. Microsoft gave a breakdown: 42 within the Linux kernel--the central component of an operating system, 65 within the Linux gui-- the user interface, 45 within Open Office, Linux's reply to ms office, 15 within e-mail programmes and 68 violations by other open source programmes. "It is not accidental infringement," said Horacio Gutierrez, licensing chief, Microsoft. "There is an overwhelming number of patents being infringed," he added. Microsoft ceo Steve Ballmer said the violations were a matter of principle.

Linus Torvalds, lead developer with Linux, says: "It's certainly a lot more likely that Microsoft violates patents than Linux does." Microsoft has, however, not specified the patents violated, he added. "Basic operating system theory was fully developed by the end of 1960s. The fundamentals were well established half-a-century ago and has since long lost any patent protection," Torvalds said. He challenged Microsoft to name the patents so that they could be tested in court or open-source developers could rewrite the code to avoid the violation.

There's a history to the showdown. A patent indemnification pact was signed in November 2006 between Microsoft and Novell--the manufacturers of Linux's suse brand. Under the deal, the companies agreed not to sue each other's customers and the move drew flak from the open source community, which saw it as an admission that Linux could include Microsoft's intellectual property. They also alleged Microsoft used the deal to spread misinformation about them. According to Microsoft sources, the new charges came in reply to the criticism.

If Microsoft opts to sue the open source community, it will eventually trigger a patent battle.