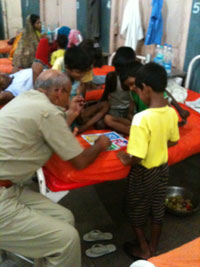 Three weeks after the incident of mid-day meal poisoning in Chapra, Bihar, 22 of the children who survived were discharged from Patna Medical College and Hospital on August 6. Officials from the state government distributed new clothes to the children. Dressed in new clothes and with toys in hand, the children were sent to their hometown, Chapra, in five ambulances under tight security. The ambulances were flagged off by state health secretary Vyasji.

It may be recalled that 24 children of Dharmasati primary school died after consuming the mid-day meal on July 16. Monocrotophos, a deadly insecticide of the organophosphorous family, had been found in the cooked meal. Thirty-one students were brought to Patna Medical College and Hospital for treatment on July 16. Two of them were brought dead, two died in the hospital and one family took their child to a private nursing home.

While some of the survivors returned home today, the fear of side-effects of the poisoning and the dearth of medical facilities in Chapra haunt parents and doctors. 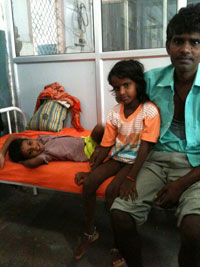 Eight-year-old Preeti Kumari is one of the 27 survivors of the mid-day meal poisoning incident. She defeated death, recovering from respiratory paralysis caused by the poisoning; the doctors call it a miraculous recovery. However, she has lost her appetite as psychological scars of her ordeal persist. “Babu, that food nearly killed me. I am scared,” pleads Preeti as her father Baldev Mahto coaxes her to eat.

Barely a few feet away is seven-year-old Mantu Mahto. The boy survived the poisoning incident but is now irritable, and has developed diplopia or double vision. His diplopia is a direct side-effect of monocrotophos poisoning.

Of the survivors, 27 children still suffer from the threat of impending respiratory paralysis, irregular respiration, tingling in the limbs, diplopia and recurring nausea. Senior paediatrician Nigam Prakash Narayan, who led the team of six doctors at PMCH in the treatment of the children, said that the nicotinic effect might recur among these children.“Their health needs monitoring,” he says.

Organophosphorus once consumed does not flush out of the body easily, says Muhammad Mahtab, one of the doctors treating the children. “The poisonous chemicals get stored in the body fat,” he adds. The poison in the body fat is released over time, causing mild to severe side effects. 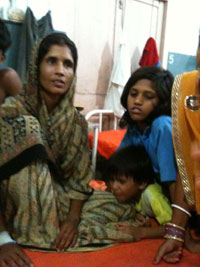 Vinay Yadav, a civil surgeon in Chapra, is fretting over the discharge of the children from PMCH. Government hospitals cannot administer atropine which is used as an antidote for organophosphorous, says Yadav.

The children were ready to be discharged on Sunday. However, the PMCH authorities decided to release only 22 of the 27 children on August 6 as four children and the cook Manju Devi might need doses of atropine.

In Dharmasati village and in Chapra, only basic health services are available. The primary health centres (PHCs) and Sadar hospital in Chapra do not have the expertise or the infrastructure to deal with acute organophosphorus poisoning or its side-effects. 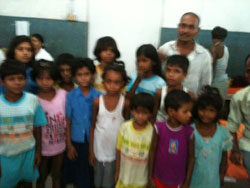 The families of Surender Prasad, Bhegaru Rai and the late Ravindra Rai live in a family-owned house. Manju Devi, the wife of the late Ravindra Rai, cooked the midday meal at Dharmasati on the fateful day. Nine children of the house suffered from poisoning, and battled for life for almost 15 days. Prasad recounts his horrific experience of the poor health services in Chapra.

“I took my daughter Priyanka Kumari (9) to the PHC and they referred her to Sadar hospital in Chapra. They had no medicine or expertise. My daughter died because of lack of proper medical attention,” says Prasad.

Prasad’s fears regarding the treatment of the children in their hometown were allayed by Narayan. “A team of doctors will visit the village once in a month to monitor the health of kids,” says Narayan. But the families’ nagging worry is – what if there is an emergency?