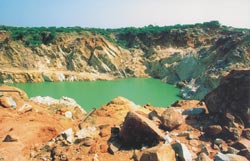 New Delhi, November 15
The extent of degradation in and around mines is the evidence of total failure of the state administration to enforce basic rules for ecological safeguards. Recent attempts at planting trees are cosmetic. Exposed groundwater lakes observed in mining sites only reconfirm the worst fears. If mining could not be stopped in so many pits even after reaching groundwater level there is no guarantee that...those mines still at the surface level will abide by the stipulated norms when they reach the water table."

The epca document, submitted to the Supreme Court (sc) on October 21, 2002, is yet another stinging indictment of the Haryana government for allowing mining activity to thrive in the state at the cost of the environment. In September, the apex court had directed the epca to file a detailed report on the issue. Earlier, too, in July the epca was told by the sc to submit a report on the environment and groundwater situation in the region.

It was in May 2002 that the sc had prohibited all types of mining operations and pumping of groundwater on Haryana's side of the ridge and Aravalli hills in a five-kilometre (km) radius from Delhi (see map). Significantly, in its latest report the epca has recommended that the ban must continue to be enforced.
Bruised and battered by rampant mining activity, the Aravalli hills region in Haryana on the outskirts of Delhi has suffered severe environmental degradation over the years. Expectedly, a protracted legal battle has ensued.

The original sc order on restricting mining in Haryana dates back to May 1996. In the M C Mehta versus Union of India case, the court had ordered a complete ban on mining within a 2-km radius of Surajkund and Badkhal lakes. Further, it had stated that no mining lease should be renewed in the 2 to 5-km radius unless a no-objection certificate (noc) is obtained from the Central Pollution Control Board (cpcb) and the Haryana Pollution Control Board. The National Environmental Engineering Research Institute (neeri), Nagpur, had recommended an environment management plan for mining in the zone. Sadly, despite the safeguards, there was no discernible change in the ground situation.

In May 2002, in another ruling in the same case, the sc clamped down on mining operations again in a 5-km radius from Delhi after the Delhi Ridge Management Board filed an intervening affidavit. The board contended that excessive mining and draining out of groundwater near the border had depleted the water table of the Asola Bhatti Wildlife Sanctuary and the ridge.

The Haryana government promptly filed a review petition against the order. The mines and geology department of Haryana argued that an underground dam between the Delhi and Haryana border prevents water movement from one side to the other. "An impervious layer of rocks separates the Anangpur area in Haryana and the sanctuary in Delhi," maintains a department official.

Subsequently, the epca was asked to visit the area and submit its findings. The authority presented its first report on August 9, 2002. It found that leaseholders in Faridabad were not adhering to the noc stipulations such as filling up bottom layers of excavated pits with flyash or municipal solid wastes and replacing the topsoil for land reclamation. Apart from this, no green belt was developed around the lease areas.

In September, the apex court again directed the epca to inspect all the individual mines within the five-kilometre radius in Faridabad. The most visible violation pertained to the conducting of mining operations below the water table level. The numerous exposed groundwater bodies (as against two to three claimed by the Haryana government) that can be seen scattered all over the region are testimony to this. In at least nine out of the 26 individual mines that the epca inspected, it found that pits had been dug below the water table. " epca saw evidence of pumps and pipes being used to drain out...groundwater so that mining could continue, destroying the groundwater reserve of the areas," reads the report. A leaseholder confided to Down To Earth that since the best material is found below the water table level, most miners continue extraction after draining the first layer of groundwater.

The Central Ground Water Board (cgwb), which is assisting epca, has questioned the contention of the Haryana government that mining in the state would not impact groundwater levels of Delhi. It notes in a report submitted to the authority that the Aravalli hills are highly fractured, jointed and weathered. This makes them a major recharge zone for the surrounding areas. "Dewatering of mines in the Aravalli hills has affected groundwater regimes of the mine area as well as (the) buffer zone, resulting in (groundwater) depletion," concludes the document.


Mining and politics are inextricably linked in Haryana. Over the decades, heavyweights across the political spectrum have cemented the unholy nexus monopolising quarries in the Aravalli hills (see box: Pit invasion ). "Politicians of almost all the major parties are involved in legal as well as illegal mining in Faridabad and Gurgaon," alleges a leaseholder. This helps keep the authorities at bay and allows mine owners to take liberties with the law. Many ministers and legislators are said to have been favoured during consequent regimes in the allotment of mining leases.

"The ruling party appeases its supporters by doling out this sop to its members or their relatives," reveals Krishan Pal Gurjar, member of the Haryana legislative assembly. He is the Mewla Maharajpur (Faridabad district) legislator. "These people have clout and no one can dare raise their voice against them," says an owner of a crusher in Gurgaon (see box: Case history).

Notwithstanding the clampdown, the state government and miners are hell-bent on restarting mining albeit outside the banned area. In Faridabad, mining activity has already commenced near Kot village. Operating charges have been hiked to compensate for losses incurred due to the restrictions. "Things are just as bad. Only, the location has changed," says a worker in one of the pits. After a breather he resumes his work, digging deeper and deeper.