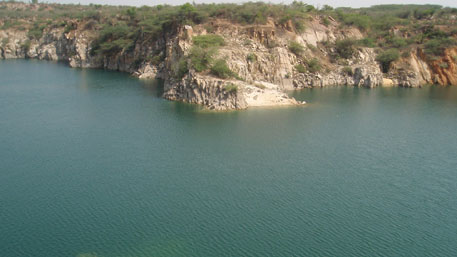 The familiar lakes in the Aravalli hills skirting south Delhi may be disappearing, but some new water bodies are popping up in the region that has been ravaged by mining in recent years. Take a walk down the unpaved path leading away from the road opposite Manav Rachna International University in sector 43 of Faridabad township on Delhi-Haryana border. The path winds through a kikar (Prosopis juliflora) forest, and one soon sights a large expanse of water, 500 metres end to end. The water turns from blue to green as the depth increases.

The local people and Google map refer to this water body as Bharadwaj lake. Bharadwaj is said to be the contractor who was allotted the mining contract in that area for red badarpur sand (red silica). But as per Faridabad mining department records, there is no one named Bharadwaj who was allotted a mining lease in that area. It then becomes clear that the water body is a result of illegal mining. There are a number of such water bodies that have filled the depressions left by mine contractors.

Some of these depressions are more than 100 feet deep; at some places these are more than 40 feet below the water table and have punctured the water aquifers, which explains the water accumulation in the pools. “Digging to that depth always impacts surrounding areas. It interferes with the flow of groundwater, which in this area flows towards the plains and mountains, says Manu Bhatnagar, head of the natural heritage division of  the Indian National Trust for Art and Cultural Heritage (INTACH).

“It is also highly likely that the drying up of the Badkhal lake, situated south-east of Aravalli, is a consequence of this disturbed flow regime and puncturing of aquifers. It seems the most plausible explanation because the lake would not be dry since there has been adequate rainfall in the past few years,” says Naresh Chandra Pant, professor in the department of geology at Delhi University, who has conducted research in the area. Surajkund lake is another well-known water body that has dried up because of mining activities.

The mining contractors pump water out of these pits to dig as deep as possible, until they punctured the aquifer. This is the reason that these deep depressions retain water throughout the year, say geologists. The red badarpur sand (for which the miners dig as deep as the water table) is found under the rocks and has tendency to retain water. Removal of this layer of sand exposes the groundwater. This is done illegally. The water sucked out while de-saturating the aquifer is discharged into a nearby gully. From the edge of the Bharadwaj lake, one can see a pipe immersed in the water and a small shed housing a small pump set. This could be used for illegal extraction of water as no water is being used for official supply.

Mecca for mine contractors

The Aravallis are rich in minerals and mining in the hill range for red badarpur sand, silica, quartz and other stones has been on for decades. These materials are always in demand for building activities and construction in and around Delhi. In Haryana, official mining started in 1984 using the lease system, with two different lease types. One was granted for a 10 year period for mining minor minerals such as sand and rocks; the other leases extending for a 20-year-period are to mine major minerals such as silica and quartz. In Faridabad, the state government signed 36 lease agreements and has identified four vacant areas for leasing (not leased out so far), covering 6,489.96 hectares (ha) over the past thirty years. This is the official account. 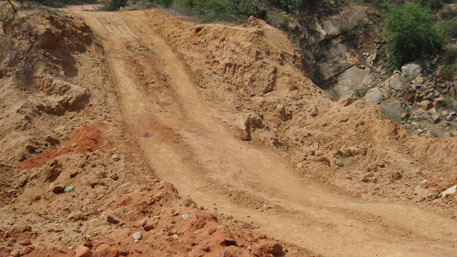 To avoid the Supreme Court’s ban, the Rajasthan State Mining and Geology Department redefined a hill. As per their definition, any raised area less than 100 metre cannot be categorised as hill. Illegal mining continued in the years to follow. In 2009, the Supreme Court banned mining throughout the Aravallis again. This was done due to continuous reported violations of explicit conditions, including the promise that mine owners would ensure no ground water would be discharged outside the lease area premise and that measures for rainwater harvesting would be in place. It is no state secret that illegal mining continues. 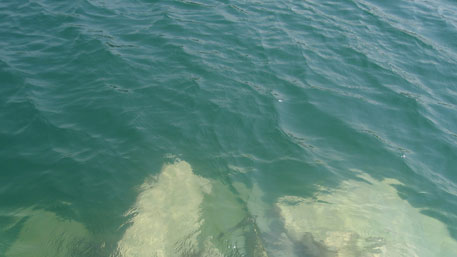 None of the lease agreements have been cancelled thus far; only mining is banned. The government offered refunds but the mine owners refused to accept, mining being much more lucrative. “The Haryana government has submitted an affidavit to the Supreme Court to allow mining in 600 ha of the Aravallis, with the condition that the miners take rehabilitation measures,” says Bhupinder Singh, area in-charge with the Department of Mining. This land will include part of the Aravallis not included in forestland. The case is yet to be disposed of.

These stray holes in the ground, now filled with water, are a reminder of the mining history of the region. They serve to beautify the landscape, but no more than that. They remain untouched as the Central Ground Water Board (CGWB) has no plans for the protection and utilization of the water bodies says Dinesh Tiwari, scientist with CGWB in Chandigarh. CGWB has not tested the water. However, the water is drinkable as no sewage or effluents are entering into these pits, says Tiwari. The forest department, too, has no plans to develop or restore  the area. There should be some plan to rehabilitate damaged parts of Aravalli, admits B S Yadav, divisional forest officer for Faridabad. However, Yadav stressed that these water bodies, no matter how beautiful, should not be developed as tourist spots as this will further disturb the surrounding environment of Aravalli. These mountains should be protected only for conservation of forests and soil, says Yadav. Developing these waterbodies into some form of tourist facility is tricky. As per the Supreme Court, Aravallis are categorised as forestland, as declared on December 12, 1996. No other activity apart from forestry is permitted.

The construction material has to be sourced from somewhere. If not from the Aravallis, it will come from someplace else. Some other mountain will be flattened. “It is an irrational decision of the court to ban mining; there is no need to ban mining completely as these hills are rich in many useful minerals. What we need is more environmentally sustainable and scientific mining. The government allots mining areas without comprehensive research. There is no aquifer mapping. There are no environmental impact assessments,” says Pant. Others remain skeptical. “There is no effective mechanism in place to ensure the compliance of such conditions by the mine owners as this happened previously too,” says Chetan Agarwal, consultant with Winrock, a Delhi based non-profit. Meanwhile, rampant mining continues.

Supreme Court judgment on mining in the Aravalli Hill Range of Haryana as on 8th October, 2009

Supreme Court judgment on mining in the Aravalli Hill Range of Haryana as on May 8, 2009

Supreme Court judgment on mining in the Aravalli hill range of Haryana as on 14 May, 2008

Supreme Court judgment on mining in the Aravalli hill range of Haryana as on 13 April, 2006

Supreme Court judgment on Aravalli hill of Haryana as on 19 April, 2002