Will biodiversity hotspots such as the Himalaya become hunting grounds of the notorious mining industry? This concern has been raised by experts in the wake of research advocating that the probability of finding large quantities of sulphide ores of metallic elements, such as zinc and gold, is higher in the mountain layers than the seafloors. Over-exploitation has led to a significant depletion of the underground ore stock. Therefore, miners are seeking new sources -- mountains and oceans... 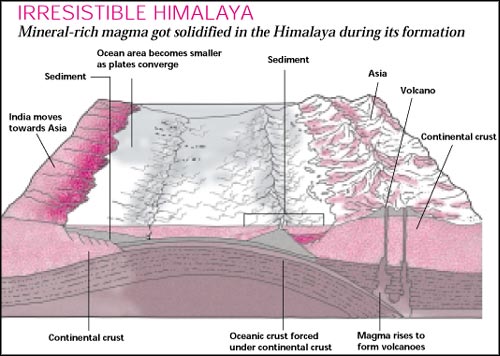 will biodiversity hotspots such as the Himalaya become hunting grounds of the notorious mining industry? This concern has been raised by experts in the wake of research advocating that the probability of finding large quantities of sulphide ores of metallic elements, such as zinc and gold, is higher in the mountain layers than the seafloors. Over-exploitation has led to a significant depletion of the underground ore stock. Therefore, miners are seeking new sources -- mountains and oceans. In 1979, there was a trend to tap the mineral booty of the seafloors, but the operations were found to be economically unviable. "The deciding factor was the amount of minerals. In the ocean floors, the minerals are found in lesser quantities than what is desirable," says Michael Solomon, a visiting professor at the Centre for Ore Deposit Research, University of Tasmania, Australia. Solomon conducted the research along with Cecilio Quesada of the Instituto Geologico y Minero de Espana, Spain.

They analysed two sulphide ore deposits located in the Iberian pyrite belt of Spain and the Mount Read province of Australia. They found that the ores were deposited in large quantities in many spots in the two places. According to Solomon, the 'sizeable deposition' can be attributed to the fact that mountain ranges were formed during continent-continent collisions. During the collisions, huge amounts of magma and super-heated water, rich in dissolved minerals, erupted out of the mantle (one of the deepest layers of the Earth), and got crystallised in the mountain layers. This process is unlike what happens in the ocean beds -- volcanoes belch out small quantities of magma, which gets scattered all over the seafloor after solidifying.

The study is bound to be considered favourably by countries like India, which intends to expand its mining operations. It rolled out the red carpet for transnational mining corporations during the recently held World Mining Congress. The Uttaranchal government has already granted a licence to Pebble Creek Resources Limited, a Canadian mining firm, to explore sulphide ore deposits located in Askot village in Pithoragarh district. This may be the first step towards destroying the precious environs, assert environmentalists and geologists. "The Askot deposits can yield only a few grammes of metals per tonne of ores mined. Why destroy the precious environs for such a little gain?" avers R Shreedhar, regional convener of the activist body Mines, Minerals & People, New Delhi centre. According to him, the geology of the Himalaya makes its imperative to avoid mining there. "Large quantities of water can seep into the mines, which will make the region more prone to landslides," he explains. Solomon, however, discounts the problem. "Individual deposits of the ores will be found over a few kilometres only, and the impact of mining these is seismically insignificant compared to the dams built in the area," he states.

Such arguments are baseless, contends Shreedhar. Dams are built for community development and not to fill the pockets of a few, as is the case with mining. Therefore, the society can bear the brunt of their adverse impacts. The mining activities in the Himalaya, asserts Shreedhar, would indeed spell disaster for the local people. In Uttaranchal, for instance, miners may encroach on the mere 10 per cent land available for agriculture. The land will also be adversely affected due to the careless dumping of effluents. "That mining companies do not follow ecofriendly practices is quite well known," asserts Ravi Shanker, former director-general of Kolkata-based Geological Survey of India. "The problem is more pronounced in India because of its lax environmental regulations," says Shreedhar.

According to D Chandrasekharam, professor of earth sciences at the Indian Institute of Technology, Mumbai, mining in places like the Himalaya would not only ruin the biodiversity hotspot, but the entire nation. "Numerous rivers originate from the Himalaya. Any mining activity is going to pollute the entire river system," he explains. Such issues make it imperative to analyse the feasibility of mining in the Himalaya before granting more licenses.