Chhattisgarh may have stopped Bailadila mining, but for how long?

Tribal protestors may have had the first round, but mining giants are sure to put pressure

Nearly 10,000 people from 200 tribal villages across Chhattisgarh protest in Dantewada against mining a hill, which they consider sacred. Photo: Purushottam Thakur

It was an unusual morning in Kirandul, a hilly town in southern Chhattisgarh. On June 7, as soon as day broke, thousands of people from 200-odd tribal villages surrounding the Bailadila hill range started congregating at the gates of the National Mineral Development Corporation (NMDC), a public sector unit that runs all iron ore mines in the hill.

Carrying food and drums, and wielding axe, bows and arrows, they had come prepared for a long fight and declared an indefinite protest against NMDC’s attempt to raze a distant green hill, which they referred to as the abode of Nandaraj, their nature god.

Their mood is reminiscent of the rage among forest dwellers of Odisha’s Niyamgiri hills during the country’s first environment referendum in 2015. The Supreme Court had asked Dongria Kondh and several other tribal communities, who worship the hills as their deity, to decide if mining in the hills would affect their religious and cultural rights.

At least 10 villages had unanimously rejected the proposal, forcing the state government-owned Odisha Mining Corporation and London-based Vedanta Resources to abandon the plans of extracting bauxite from the hills and supply it to Vedanta’s alumina refinery.

But in Bailadila, people had no inkling that the government had cleared their sacred hill for mining and awarded the mining contract to Adani Enterprises Ltd (AEL) until they saw trees being felled along the approach road early this year. The hill is part of a high-grade iron ore that spreads over 315 hectares (ha) and has been labelled as deposit-13 by NMDC.

With the potential to yield 8 million tonnes per annum (MTPA) of high-grade iron ore, it is estimated to be the richest reserve in the entire hill range, which already contributes almost 70 per cent of production of NMDC. “We also got to know that the government in 2014 had submitted bogus gram sabha consent of Hiroli village, which adjoins the hill, showing the village residents’ approval for the mining project,” alleges Mangal Kunjam, a tribal leader from the region.

On January 23, the Hiroli gram sabha passed a resolution challenging the authenticity of the 2014 gram sabha consent and opposing mining on their sacred hill. This acted as trigger to the protest, which immediately received support from political parties, social activists as well as the NMDC trade union leaders. 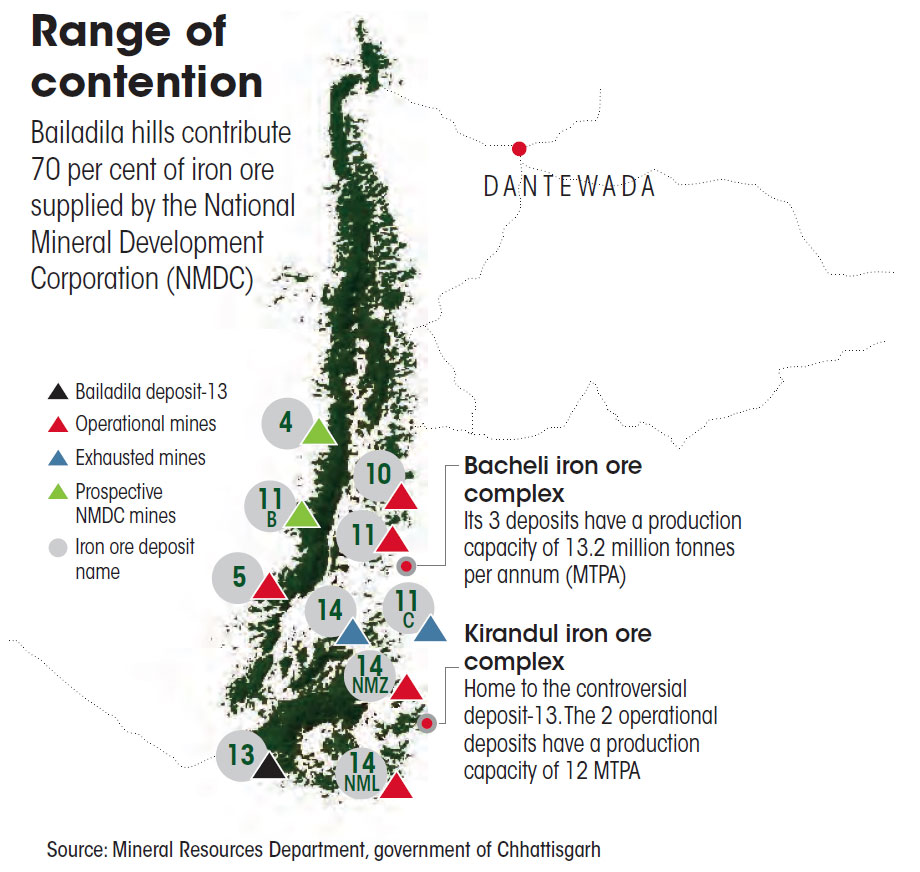 On June 11, Chief Minister Bhupesh Baghel said, “We have decided to investigate the gram sabha clearance. All activity will immediately be put on hold.” He also initiated a probe into the felling of trees in the mine area.

Soon after his announcement, Adani released a statement that read: “As on today, Mining Contractor AEL does not have any presence in Kirandul for mining purposes.’’ An analysis by Down To Earth, however, shows that the government has actually ignored rules and fudged information in a hurry to open up deposit-13.

In 2010, when NMDC prepared the project proposal to develop the deposit, it said the area did not have any rare or endangered flora or fauna. The proposal was immediately rejected by the Forest Advisory Committee (FAC) of Union Ministry of Environment and Forests (MoEF) which said the forestland is of high biodiversity value. The committee also noted that NMDC had not done land reclamation in the other exhausted mines in the area.

This did not deter the state government from pursuing the matter. In 2013, it again wrote to MoEF. This time, the documents it submitted portrayed a different picture. For instance, it justified the project saying, “The current production capacity of iron ore from Bailadila Sector is 36 MTPA against the projected demand of 50 MTPA leaving a shortfall of 14 MTPA. Existing production of iron from existing mines of NMDC cannot meet the total requirement of ore. Thus there is a need of opening new iron ore mines in the Bailadila.”

This was in contradiction to the initial proposal that said iron ore from the mine was slated to be exported to Korea and China. While the 2010 proposal said the permission to divert land for deposit-13 was being taken because the ore in deposit-14 was exhausted, the 2013 letter to MoEF contradicted the claim by saying that NMDC cannot do land reclamation at deposit-14 as the reserve is yet to be exhausted.

It also submitted a biodiversity survey, which for the first time acknowledged the presence of protected wildlife species, such as panther and bear, in the proposed mine area.

In 2014, following a letter by the then Chhattisgarh chief minister, FAC gave an in-principle (Stage-1) approval to the project but asked the state government to submit a bank guarantee for carrying out compensatory afforestation for deposit-13.

MORE THAN THE violations, the protest at Kirandul, which lasted five days, was to voice people’s resentment against decades of mining in the hills.

This is the place, where NMDC set up the country’s first large open cast mine in the 1960s to supply iron ore to Japan. Today, it has exhausted two deposits, operates another six and plans to exploit two more.

Jogi Mandvi, a 60-year-old women who had come to the protest all the way from Piranar village in Bijapur district, says decades of mining has turned all water resources in her village red. A 2014 study published in journal Recent Research in Science and Technology underscores her observation.

The Shankhini and Dankini rivers, flowing through Bailadila, are one of the most polluted in the country. Effluents from iron ore mining have turned the rivers red.

Most wells are drying up, too. Bailadila mines have damaged almost 35,000 ha of agricultural and forest land. Deep and vast mining activity may cause a serious problem to environment, it states.

This is not the first time people are protesting against mining in Bailadila, says Degree Prasad Chauhan, state president of People’s Union for Civil Liberties, a human rights group.

Earlier, in 2005 and then in 2006 proposals by Tata and Essar to lease iron mines in Bailadila had faced opposition. Though the companies had to abandon the projects due to legal hurdles, this time no one is sure if the government would side with the tribal people or the companies.

After all, it has a 49 per cent stake in the joint venture NCL that is developing deposit-13, says Chauhan.

(This article was originally published in Down To Earth's print edition dated July 1-15, 2019)