As development projects continue to receive Centre’s push, officials within the government fear that rights of tribal communities are likely to be affected 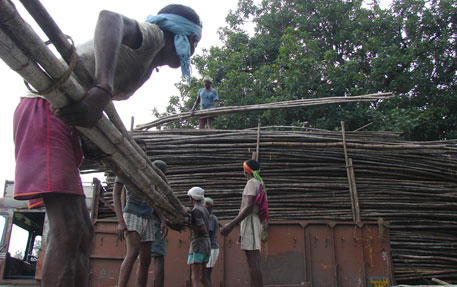 Union ministries are engaged in an official tussle over the ambit and implementation of the Forest Rights Act.

After the environment ministry (MoEF) issued a circular in October 2014, stating that the Act would not be applicable in forests less than 75 years old, the tribal affairs ministry (MoTA) wrote to MoEF asking for the circular to be withdrawn.

The environment ministry letter had said that development works on “plantations” notified as forest land less than 75 years ago and with no recorded tribal population would be exempt from seeking consent of the concerned gram sabha as stipulated by the Forest Rights Act. It had also stated that only a certificate by the concerned District Collector would be required to identify a forest land as “plantation”.

With its mandate of development, the BJP-led Central government hopes to fast-track development works such as construction of roads and canals and industrial projects, many of which will fall in forest areas.

The tribal affairs ministry retorted in a letter, dated November 12, 2014 and accessed by Down To Earth, stating, “The basic legal point is that the Forest Rights Act does not provide any scope to any executive agency for any kind of relaxation of the applicability of the Forest Rights Act.”

Hrusikesh Panda, secretary of the tribal affairs ministry, wrote in the letter that “in the recent past an impression is being created that the administration/implementation of the Forest Rights Act is hindering or delaying the clearance of developmental projects”. Highlighting that the Act is “for recognition and vesting of pre-existing rights of forest dwelling STs and Other Traditional Forest Dwellers”, Panda added that “we do not have any evidence that the FRA process delays projects”.

“We would like to flag one issue,” the letter said. “The FRA is the law of the land. A project which takes a short cut can be stopped by just one village which has land classified as ‘forest’ under various laws and court orders.”

The letter also stated that recent announcements and the MoEF circular have conveyed the message that the government is against fair implementation of the Forest Rights Act, which it termed as “not desirable in the interest of peace and governance in forest areas”.