Cancer gnawing at the northeast state

Lalnunmawii (name changed) lives in the Saron Veng locality of Mizoram’s capital, Aizawl. Of her eight siblings, three (two brothers and a sister) have fallen prey to cancer. One of her closest childhood friends died of stomach cancer in 2002. This woman’s husband had succumbed to oral cancer five years earlier.

Another neighbour of Lalnunmawii, the sole breadwinner of the family, passed away battling oesophageal cancer in early 2002. Then there were the local tailor and his wife, who too became victims of the disease. There is hardly any family in the state that is not affected by cancer, points out Lalnunmawii. Data collected by researchers in Mizoram over a long period bears out this disturbing trend. Yet it is only now that the state is being put on the cancer map of India. Ironically, even the late inclusion has been necessitated by an Indian Council of Medical Research (ICMR)- World Health Organization (WHO) project to develop a cancer atlas of the country — not the high incidence of the disease in the area.

Thanks to the collaborative venture, the entire northeast region is being covered by the National Cancer Registry Programme (NCRP). Cancer registry facilitates localised data collection, which in turn could throw light on why some types of cancer are more prevalent than others. It is a prerequisite for both prevention and treatment. While only a dozen registries were operating in the country earlier, the atlas has left the authorities with no option but to incorporate the neglected northeast region.

Population-based cancer registry (PBCR) provides information about the pattern of the disease in an area, and Hospital-based cancer registry (HBCR) details each case that figures in hospital records (see Down To Earth, Vol 10, No 15, December 31, 2001). An HBCR is already sited in Assam. Now the northeast will have its PBCR as well, which would also be headquartered in Assam. 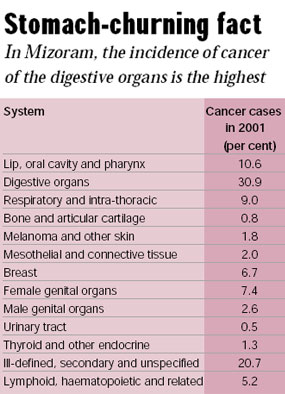 These steps could help improve the situation in Mizoram, where cancer is a major cause of adult deaths. “The problem first became noticeable in Mizoram in the 1960s,” reveals C Lalhmingliana, a surgeon in Aizawl’s Presbyterian Church Hospital. According to a study conducted by the doctor on males in Mizoram between 1994 and 1998, cancer afflicted 347 men per 100,000.

In the absence of any definitive information, several conjectures have been made about the prevalence of the disease in the state. It is noteworthy that cancers related to the digestive system such as those of the throat, stomach and oesophagus are the most common in the area (see table: Stomachchurning fact).

“The civil hospital is full of people suffering from stomach cancer,” says K T Bhowmik, head of the department of radiotherapy at Safdarjang Hospital in Delhi. Bhowmik visited Mizoram recently. Eric Zomawia, of the department of pathology in Aizawl Civil Hospital, and his colleagues collected data from different hospitals and pathology labs from 1993 to 1998. They found that a troubling 29.9 per cent of the cancer cases in the state were that of the stomach.

This general tendency makes the local diet the primary suspect. Tobacco consumption seems to be one of the main reasons for the increased incidence of cancer. Along with smoking cigarettes and chewing tobacco and betel, the people also consume tuibur— a liquid obtained from passing the smoke of local tobacco leaves through water.

The centuries old practice of eating smoked vegetables and meat has been incriminated as another causative factor. Fermented pork (sa-um) and high salt intake, too, have been linked to the disease. The widespread use of pesticides for agricultural purposes as well as for catching fish is also believed to have had an adverse impact.

Studies carried out in the neighbouring state of Assam provide some more clues. Kalakhar, a drink prepared locally by burning parts of the banana plant, has emerged as a significant cause of cancer of the oesophagus. Furthermore, consumption of hot and spicy foods and beverages, apart from leftovers, is thought to increase susceptibility.

A study carried out in Nagaland shows how eating smoked meat can lead to nasopharyngeal cancer. As a part of this exercise, the acetone extract of the charred portion of smoked meat was tested for its carcinogenicity and its ability to cause chromosomal aberration in the bone marrow cells of mice.

The disease assumes a deadlier dimension due to the lack of treatment facilities in the area. For instance, the state’s only cobalt machine is not functioning. “Diagnostic tools to conduct even basic tests such as computed tomography imaging (CT scan) and magnetic resonance imaging (MRI) are either not available or not operational,” laments Zomawia. “Rich people can afford to go out of the state for treatment. The poor, however, have no option but to wait for death,” says Zoramthanga Khiangte, a physician in charge of the Aizawl-based Cancer Society of Mizoram. The organisation provides assistance to cancer patients.

The state government, on its part, passes the buck to the centre. “When we sought the Union government’s help, we were simply told that our population was too small,” reveals a local official. To be sure, ICMR scientists reportedly visited the area about 10 years ago and did not take any action subsequently.

“Unless corroborative data is available, we cannot say whether the problem exists or not,” asserts Kishor Chaudhry, deputy director general, division of non-communicable diseases, ICMR, New Delhi. And data can’t be collected “without infrastructure”, he adds. A Nandakumar, in charge of the cancer atlas programme of the NCRP, explains why existing information cannot be utilised: “The data generated by just a few hospitals is not representative of the whole population.”

Even as the information gathered so far by local researchers is believed to be inadequate and fragmented for the purpose of detailed analysis, it amply shows that all is not well with the state. But bodies like the ICMR failed to pick up the threads and take the exercise to its logical conclusion. The cancer atlas has, however, spurred the ICMR into action. In order to get a clearer picture of the problem, it is falling back on the data collected during 2001 by doctors of Aizawl Civil Hospital.

What has confounded experts is the fact that cancer has spread its tentacles statewide in spite of Mizoram’s relatively positive health indicators. While infant mortality is as low as 19 in the area compared to the national figure of 70, communicable diseases are also decreasing. The focus needs to be shifted from communicable diseases like AIDS to non-communicable ones such as cancer, opines a doctor.

Fortunately, this may be possible now with the ICMR-WHO project spotlighting the northeast. Otherwise, too, efforts are underway to get to the root of the problem. The Regional Medical Research Centre at Dibrugarh in Assam has joined hands with the health department of Mizoram to conduct a study on the effect of diet on stomach cancer. A programme seeking to create awareness about cancer control through health promotion, early detection and palliative care will be launched in the near future. The people of the state are also becoming more conscious about their eating habits.

Meanwhile, the Union government is in the process of setting up a centre for the development of enhanced diagnostic facilities for cancer. This would include an oncology wing and screening techniques. Even the treatment facilities are being spruced up. The status of Aizawl Civil Hospital has been upgraded to that of a regional cancer centre (RCC). The move is likely to benefit poor patients, as referrals would be considerably reduced. Moreover, timely treatment will bring down mortality rates.

Predictably, the authorities are taking all the credit for the improved situation. “We are trying to increase the registries in the country to collect systematic data,” says Nandakumar. But local experts disagree. “The facilities are not being handed to us on a platter. We had to strive hard to get them,” contends Khiangte. “We are getting funds now because the Union government and WHO have awoken to the plight of the northeast,” feels an official of the directorate of hospital and medical education, Mizoram.