Prakash Javdekar gets Environment ministry and I&B, Gopinath Munde given the charge of Rural Development and Panchayati Raj portfolios 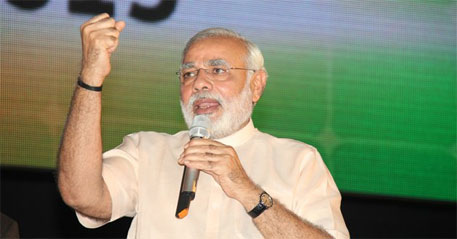 Narendra Damodar Modi, the 15th Prime Minister of the country, took oath on Monday evening along with 23 Cabinet-rank ministers, 12 Ministers of State (MoS) with Independent charge and 10 MoS.

The list of ministers is dominated by Members of Parliament (MPs) from Maharashtra and Uttar Pradesh. Interestingly, Nihal Chand is the only council minister from Rajasthan, where the BJP won all 25 constituencies. Sources in the party confirmed that a Cabinet expansion is expected in four weeks, which will see more Cabinet ministers.

Immediately after the swearing-in ceremony got over, the Prime Minister’s official website ran a message: “As we devote ourselves to take India’s development journey to newer heights, we seek your support, blessings and active participation. Together we will script a glorious future for India. Let us together dream of a strong, developed and inclusive India that actively engages with the global community to strengthen the cause of world peace and development.”

Senior BJP leader and former spokesperson Prakash Javadekar has been given the Union Ministry of Environment and Forests (MoEF) along with the Information and Broadcasting ministry. Javadekar has been critical of the UPA government for going slow on environmental clearances for industrial projects.

Piyush Goyal, former Rajya Sabha and national treasurer for BJP has been named as Energy, Power and Coal minister, according to the party sources. Goyal, elected from Maharashtra, has been closely associated with Indian industry, especially with the banking sector.

Former Maharashtra deputy chief minister and MP from the state’s Beed district Gopinath Mundey has been given three portfolios -- Rural Development, Panchayati Raj and Water and Sanitation. The three ministries, which were under one until 2004, were separated by the UPA in 2004. They have now been merged again. The immediate challenges for Mundey, who has been given the three portfolios, will include capacity building of Panchayats, better implementation of MGNREGA and providing credit facilities for local self-help groups under National Rural Livelihood Mission.

Former Karnataka chief minister and Mangalore MP D V Sadanand Gowda is now the Railway minister. Hours before the swearing-in ceremony, a train accident in Uttar Pradesh claimed at least 40 lives and injured 100 others. According to experts, railway safety and modernization will be the biggest challenge for the new minister.

Veteran BJP leaders Murali Manohar Joshi, who held the Human Resource Ministry during the Vajpayee government, failed to get a berth in the council of ministers. Even Arun Shourie, who was widely speculated for high profile finance portfolio, failed to make cut.

Some of the other strong contenders include Rajiv Pratap Rudy, Shanta Kumar, B C Khanduri, Subrahmanyam Swamy and Anurag Thakur. Rudy, Kumar and Khanduri held important portfolios in the Vajpayee government.

His close aides said that hardworking nature of Vardhan got him the Cabinet berth. "We were asked to name people who can work for more than 16 hours a day. We gave his name among others," said an official of Bhartiya Janta Party's Delhi branch.