Since its inception, the agro-biotech industry has had a unique selling proposition -- transgenic crops need lesser herbicides/pesticides than conventional varieties, therefore their use can help control environmental pollution. But a new report indicates that the claim is hollow 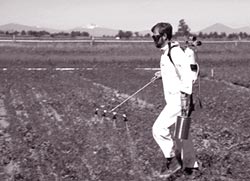 since its inception, the agro-biotech industry has had a unique selling proposition -- transgenic crops need lesser herbicides/pesticides than conventional varieties, therefore their use can help control environmental pollution. But a new report indicates that the claim is hollow. It shows that herbicide use of the us agricultural sector -- the chief supporter of biotechnology -- has increased significantly due to genetically modified (gm) crops.

The report has been authored by Charles M Benbrook, director of the us-based non-governmental organisation Northwest Science and Environmental Policy Centre. He analysed pesticide/herbicide usage data provided by the us department of agriculture, and found that in the first three years of their commercialisation (1996-98), gm crops reduced the herbicide consumption of the nation by about 25.4 million pounds as compared to the levels in 1995 (when transgenic crops were introduced in the nation). But in the last three years (2001-03), the herbicide use was 50.6 million pounds more than the 1995 levels, despite the acreage under gm crops remaining constant. The increase can be attributed to the herbicide-tolerant (ht) varieties of gm crops -- since 2001, ht crops have increased herbicide use of the nation by 70 million pounds, but bt varieties have reduced the usage by approximately 19.4 million pounds. Therefore, the net herbicide use has risen.

The report further mentions that the amount of herbicides/pesticides used for conventional varieties in the country has declined due to a shift towards newer chemical formulations.

Two major factors are responsible for the high use of herbicides -- the emergence of herbicide-resistant weeds, and the falling prices of herbicides. The former can be attributed to the science of the ht crop -- it is modified to withstand direct spraying of a particular herbicide, allowing farmers to spray the chemical formulation in large quantities to control a broad spectrum of weeds. For example, Monsanto's Roundup Ready -- the dominant gm crop of the us -- is modified to tolerate the company's glyphosate herbicide. Therefore, when glyphosate is sprayed on a large scale, the crop remains unaffected but the weeds are killed. "Weed scientists had warned for years that such a methodology would trigger ecological changes which would erode the technology's effectiveness. This is what has ensued in the us. For instance, since 1996, there has been a 22 per cent increase in the amount of glyphosate applied in the farms of Roundup Ready soyabean," says Benbrook.

According to experts, despite being aware of the limitations of the ht varieties, the biotech giants promoted them to give a 'fig-leaf' of legitimacy to their pesticides and herbicides. "The ht technology allows the company to make a double killing -- sell the crop seeds as well as its herbicide. Moreover, to provide incentives to the naive farmers, the herbicide cost is decreased," asserts Devender Sharma, an agriculture and food policy analyst. This has been the ground-plan in the us -- the price of herbicides containing glyphosate were reduced from us $12 for per acre application in 1996 to less than us $6 in 2002, with ht crops gaining popularity. "The findings yet again expose the hypocrisy of biotech giants such as Monsanto. They always tell half-truths about their products," avers Benbrook, adding: "Far from improving the state of the environment, the gm crops are causing even more pollution."

In the wake of the findings, other countries should think twice before introducing gm crops. In India, despite the failure of Monsanto's bt cotton, the government's Review Committee on Genetic Manipulation has granted permission to the company to commence trials of its Roundup Ready corn. According to experts, the decision proves that transgenic crops are being introduced whimsically. "How can the government introduce ht crops in India, when bt cotton has failed to deliver? In Maharashtra and Madhya Pradesh, bt crops are not performing in the fields until chemicals are added. Unfortunately such feedbacks are not taken into consideration by the officials when they grant new licenses," asserts Sachin Chaturvedi, a New Delhi-based economist.

Data pertaining to the amount of pesticides being used in bt cotton plots has not been put in the public domain. "The authorities keep the data behind close doors. Nobody wants to challenge the interests of the industry," avows Sharma. According to Chaturvedi, instead of promoting transgenic varieties, the government should promote biopesticides and biofertilisers. It is imperative to give consideration to such suggestions, as India's current level of herbicide application is minimal. "There is no need to introduce ht crops. But Monsanto and the officials are ignoring this fact. The report shows it is imperative to review the pros and cons of gm technology, which should only be used to introduce traits like drought resistance," says Rajeswari S Raina, a scientist with the National Institute of Science, Technology and Development Studies, New Delhi.