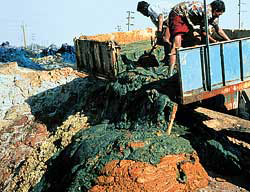 the terms 'waste' and 'material' are synonymous in the draft hazardous material rules of the Union Ministry of Environment and Forests (moef). The rules have been criticized for violating norms of the Basel Convention--an international treaty on cleaner production, minimization of hazardous waste and control on its movement--to which India is a signatory.

"The rather unusual use of two similar meaning yet different terms--waste and material--is bound to lead to enormous confusion," note D B Boralkar and Claude Alvares, members of the Supreme Court Monitoring Committee on Hazardous Wastes and say that the state pollution control boards won't be able to deal with the confusion.

The draft rules have been criticized on other fronts as well. The rules exclude biomedical waste, solid waste, waste water and exhaust gases from the category of hazardous waste.

The focus of the rules, experts say, is on recycling. "The proposal states that if a material contains less than 60 per cent contamination by a hazardous constituent, it is eco-friendly," says Gopal Krishna, of the Ban Asbestos Network of India.

The rules make the ministry the nodal agency on import and export of waste, sidelining state pollution control boards. "What is the institutional monitoring/regulatory set-up available with moef for this, especially when field organizations are left out? Will moef now grant permission to transport hazardous materials from Kerala to Noida and issue copies of permissions to state pollution control boards?" ask Boralkar and Alvares.

Even the new definition of "disposal" is limited. It is defined as treatment and deposition of any hazardous wastes on land but does not talk about disposal in water bodies and oceans, besides incineration and indefinite storage.

Ravi Agrawal of Toxicslink, a Delhi-based ngo, says instead of new rules, better implementation of the existing rules through regular evaluation and monitoring is required.

"The draft rules also violate the Environment Protection Act, 1986, and flout supreme court judgements on hazardous waste cases. In a May 1997 judgement, the apex court had ordered that no authorization/permission would be given by any authority for the import of hazardous waste items which have already been banned under the Basel Convention or to be banned hereafter with effect from the dates specified therein," he says.

The draft Hazardous Materials (Management, Handling and Trans boundary Movement) Rule, 2007, have been put up on the ministry's website and will replace the existing Hazardous Wastes (Management and Handling) Rules 1989, if given the go-ahead.