An expert panel of the Union Ministry of Environment and Forests (MoEF) has refused to give clearance to KSK group's hydropower project in Arunachal Pradesh on June 27, according to sources in the ministry. The project of 420 MW capacity is proposed on the Kameng river, a major tributary of Brahmaputra; its proponent is Hyderabad-based KSK group. The committee suggested the company relocate the project to another site as it is too close to the Pakke Tiger Reserve and the Nameri National Park.

This is the second time that the company has been asked to relocate the project, said Norbu Thongodok, chairperson of Arunachal Pradesh Pollution Control Board. He said public hearing for the project has not happened because the developer is still to obtain terms of reference for assessing the project's environmental impact. The Rs 2,500-crore project was taken over by KSK Electricity Financing India Pvt Ltd in January 2007 from North Eastern Electric Power Corporation on a build, own, operate and transfer basis.

The project location proposed earlier was Seppa town, which is the headquarters for East Kameng district. But it was rejected because the proposed dam and reservoir would have submerged the entire Seppa town. 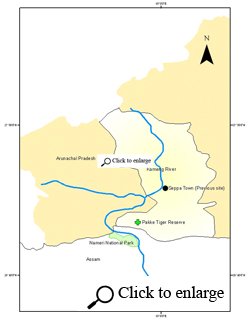 KSK then re-surveyed the area and proposed the project at another location and  applied for terms of reference for the project from EAC for the new site. The EAC members, after discussions, were of the opinion that the new alternative site is not suitable for constructing dams owing to its proximity to the tiger reserve and the national park.

When contacted, Sanchita Jindal, director in MoEF for impact assessment of river valley and hydroelectric projects, declined to give any information. She said the details should be sought by filing application under the Right to Information Act.

Maheswaran, geologist with the KSK group expressed surprise over the rejection. He said the submergence area was not more than two to four kilometre and there were no rehabilitation issues also as the new project site was a forested area. “Now we are considering the option of reducing the capacity of plant so that we could reduce the area of the project so that it is away from the tiger reserve and the national park, ” he said. But he was also not willing to reveal the location of the proposed for the project.

Himanshu Thakkar of South Asia Network on Rivers, Dams and People, an advocacy group working on impact of dams on people and environment, welcomed EAC's decision. He added that EAC  should show more consistency.  “Recently, on June 1 and 2, EAC cleared three hydro power projects in the Western Ghats area, which would submerge around 500 ha of land,” he said. He was also critical of the ministry for giving the go ahead to three other hydro power projects which are operating near the Pakke Tiger Reserve for obtaining carbon credits. “The point is that any unsustainable activity should be discouraged by coordinated efforts of the ministry,” he said.

Akhil Gogoi of Krishak Mukti Sangram Samiti of Assam, a farmers' front leading an anti dam stir, too, questioned EAC's role in the clearance to Lower Siang, Dibang and the Demwe Lower hydro projects. He said  these decisions cannot be appreciated because the projects will cause huge destruction to the environment and affect people. He said these projects are in eco-sensitive and earthquake prone areas.