Officials of the health department in Kerala’s Wayanad have confirmed one more death due to Kyasanur Forest Disease (KFD) on March 4. Sulekha, 42, an Accredited Social Health Activist (ASHA) who died on February 27 has been declared a victim of KFD or monkey fever.

In the past one month, this is the fifth confirmed death due the disease in the district located within Western Ghats and bordering Karnataka. The other four persons who died of the disease were residents of two tribal colonies in the district. 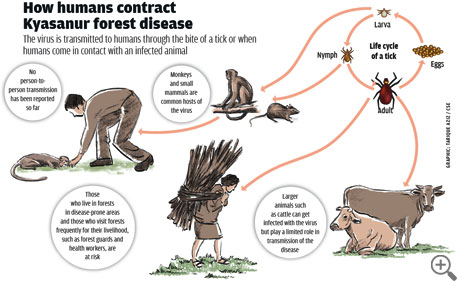 Sulekha, a resident of Sultan Bathery taluk, had been an ASHA worker for the past eight years. She was admitted to a private hospital with fever and acute headache on February 22, and was later referred to the Medical College Hospital in the neighbouring district of Kozhikode. She was working under Sutan Bathery taluk health centre and had participated in drives for providing preventive vaccine to the people in the nearby tribal colonies.

Sulekha's blood samples had been tested at Manipal Centre for Virus Reasearch (MCVR), in Karnataka. The samples have tested positive for KFD, according to the health department officials.

Four suspected cases have been reported in the district on March 4 and about 20 persons are under observation. Another tribal woman, Mathi, 60, who died on Friday in the Kozhikode Medical College is suspected to have been affected by KFD. Her blood samples have been sent to MCVR for confirmation.

Earlier, the state government had declared a compensation of Rs 2 lakh for those who died of the disease which was considered to be endemic to five Western Ghats districts in Karnataka and is now spreading to Kerala and Tamil Nadu.