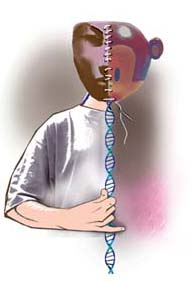 scientists have sequenced the entire genome of rhesus monkey--the most commonly used primate in biomedical research--to find solutions for a variety of maladies ranging from aids to depression. It is boom time for monkey research with monkey genes promising to provide new evolutionary and biomedical insights into the lives of its closest cousins--humans. And the Indian rhesus monkey will now be an asset for researchers worldwide as it responds to certain diseases like aids faster than other varieties.

Despite the fact that the chimpanzee, the genome of which was sequenced earlier, is more closely related to humans, the rhesus genome sequencing is being seen as a more significant phenomenon.This also means evolutionary biologists now have a vantage point to better understand the genetic changes that made humans so different from either of these two closely related ancestors.

An international group of over 170 scientists that sequenced the entire genome of a female macaque living at a research centre in San Antonio, Texas, usa, feels that drug testing and work on infectious diseases like hiv and influenza will leapfrog with this development.

The rhesus monkey's nearly three billion dna base pairs are 93.5 per cent identical with humans. These two species diverged 25 million years ago. Humans and chimpanzees have 98 per cent identical genes and they separated about six million years ago.
But the rhesus has an edge because it is genetically, physiologically and metabolically more similar to humans than chimpanzees or orangutans.

Richard Gibbs, a geneticist at Baylor College of Medicine in Houston, Texas, who led the macaque sequencing consortium told Down To Earth, "We have identified genes for hair structure, immune response, intercellular communication and sperm-egg fusion. It was very interesting to note that several genetic mutations normally found in the macaques actually caused genetic diseases like phenylketonuria and a mental retardation syndrome when they occurred in human beings."

The full genetic sequencing comes at a time when India has revived its rhesus monkey population. Historically, the population of the Indian sub-group of rhesus has not been as stable. The rhesus macaques split into Indian and Chinese subgroups more than 160,000 years ago. The Chinese population grew by leaps and bounds but the Indian subgroup shrunk over the years.

Forty years back, there were about two million of these monkeys in India. They declined drastically to under 200,000 in mid-1970s, according to a census by the Zoological Survey of India. In 1978, the government of India banned the export of rhesus monkeys and increased conservation programmes. The rhesus monkey population has now grown and lies between 800,000 and 1 million.

"This certainly augurs well. We will now have to identify the hot spot areas and study the comparative homology between macaques and humans in this subcontinent to further research on their genetics," says T S Rao, advisor to the human genetics and genome analysis unit of department of biotechnology.
Researchers will now focus on monkeys from India and China to look for genes associated with specific diseases. The Indian rhesus macaque will be useful to identify the broader 'genetically interesting' areas. The Chinese rhesus may then be used to focus on specific genetic indicators for certain diseases.

Indian and Chinese macaques also respond to diseases in different ways. When infected with the simian immunodeficiency virus--a cousin of hiv--Indian macaques have shown symptoms faster than their Chinese cousins.

Says Chris Miller of the California National Primate Research Center, "The genetic similarities and differences between Indian and Chinese monkey sub-groups provide an opportunity to identify genes, and more specifically, variations in them, that contribute to disease."

Overall, the genetic differences between the two monkey groups are small, and comparing them will be similar to comparing very distantly related human groups.

However, macaque studies have an edge over other biomedical tools in that the experimental variables can be altered in controlled experiments. "These wonderful animals from India and China will now become great assets in biomedine," Miller says.