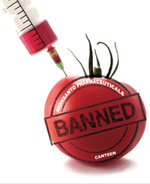 Genetically modified food is banned at a canteen of its biggest producer Monsanto. Granada Group, which runs the canteen at Monsanto’s pharmaceuticals factory at High Wycombe in Buckinghamshire, serves only GM-free meal, says a report by The Independent.

Granada Group said it had decided to remove GM soya and maize from all food products served in its restaurant. “We have taken the above steps to ensure that you, the customer, can feel confident in the food we serve.”

Monsanto spokesperson Tony Coombes told the newspaper that the only reason for the GM-free food is because the firm “believes in choice”. He added that employees are happy to eat GM food as they are “sprayed with fewer chemicals”.

Conservation group Friends of Earth says, “The public has made its concerns about GM ingredients very clear. Now it appears that even Monsanto’s own catering firm has no confidence in this technology.”