Alerts have been sounded in many states 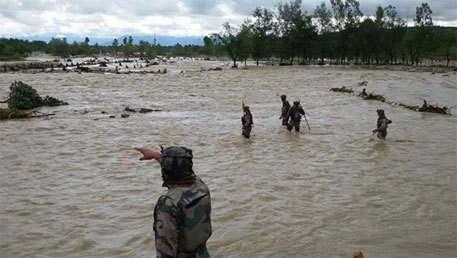 At least four states in India are reeling under floods, or anticipating them, after incessant rains triggered by the much-awaited southwest monsoon. The states include Jammu and Kashmir, Gujarat, Assam and Maharashtra.

Jammu and Kashmir, which is still counting losses from the floods of September 2014, is already staring at another fury. As River Jhelum crossed the danger mark at a few places, the state government sounded a flood alert on Wednesday night. This is the fourth flood alert after 2014 floods that were the worst in six decades.

Meanwhile, nearly 300,000 people have been affected by floods in the northeastern state of Assam. Warnings have been issued in areas around Kaziranga National Park as the floods might lead to animals encroaching in the human settlements, thus giving way to man-animal conflict. Till June 22, over 2,000 big and small animals had been affected in Lakhimpur, one of the most affected districts. Also, over 9,000 hectares of crop yield had been destroyed in the state. 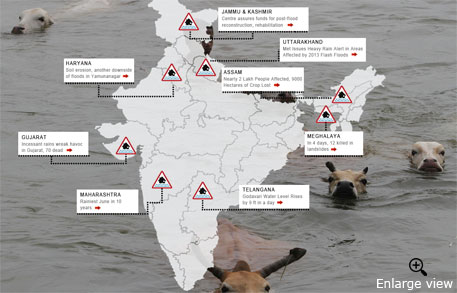 The highly-anticipated June showers have left behind a trail of destruction in Gujarat’s Saurashtra region. According to news reports, around 70 people have died so far as a result of widespread floods. Amreli district is the worst affected with 26 casualties while five deaths each have been reported from Bharuch, Jamnagar, Kutch and Rajkot districts. In Amreli, 400 of 619 villages have been affected.

In the central region of the country, many areas of Mumbai have reported flooding last week. News reports suggest that on June 19, the capital city of Maharashtra received 20 per cent of the season’s rainfall (in just 24 hours). Since then, questions are being increasingly raised about the city’s drainage system that leads to such havoc every year, during the monsoon.