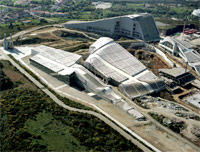 On January 10, Spain opened an architectural extravagance to the public amid complaints that the City of Culture in Galicia is a white elephant.

The complex is still less than half built after it was commissioned 12 years ago.

A library and newspaper archive were opened while four buildings—a museum, a 2,000 seat theatre, an international arts centre and a building for servicing the other five—remain in the pipeline. American architect Peter Eisenman regards his €400 million hilltop complex as a serious investment in the welfare of the people of Galicia.

But others including Anxo Luxilde, a well known Spanish columnist, see the complex as inappropriate for a country with 20 per cent unemployment.