Though eco-friendly alternatives are available, the government's malaria control programme banks heavily on use of hazardous chemicals 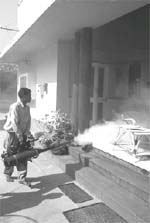 once bitten, twice shy. Well, that cannot be said for authorities of India's anti-malaria programme whose strategy to counter this deadly disease does not seem to have worked. Consider this: there has been an increase of 2.31 per cent in the number of malaria cases this year. Bihar, Orissa and West Bengal are said to be "malaria prone areas". An expert committee, set by the Union government this year, identified 29 cities that are the hotspots of the disease. Ironically, Delhi, which houses the Directorate of National Anti Malaria Programme ( namp ) is one among them. It is obvious that efforts to control this disease through the use of hazardous chemicals Dichlorodiphenyl Trichloroethane ( ddt ) have not met with success. Still, namp has done precious little to look for look for a change in strategy.

namp has the dual role of controlling the vector Anopheles on one hand, and reducing the human reservoir for pathogen ( Plasmodium ) on the other. The directorate undertakes spraying of insecticides like ddt , Benzene Hexachloride and Malathion along with using larvicides to ensure that the mosquito population does not increase. So far, these steps made mosquitoes resistant against these insecticides.

Though eco-friendly safe strategies are available, but not being used. Says V P Sharma, consultant, Roll Back Malaria programme of World Health Organisation ( who ): "There are many simple, cost-effective methods to control this disease. But their implementation is poor." While who and other international agencies are moving towards eco-friendly control methods, the Indian government continues to use chemicals to control the vector. According to Virendra Dua, Malaria Researcher Centre, Industrial Malaria Unit, Hardwar: "Malaria cases have come down by five per cent in the Bharat Heavy Electricals Limited ( bhel ) complex in Hardwar by using simple methods like larvicidal fish, neem oil, fly ash as land fill and prompt treatment. Elimination of breeding sites by physical barriers and landfills, biological control of vectors using fish that feed on mosquito larvae, health education, surveillance and treatment, environmental improvement and income generating schemes are a part of this strategy.

"The success of the technique depends upon using the correct strategy according to each ecological zone," says B N Nagpal, senior research officer, Malaria Research Centre. "Malaria is a human-made disease and it is only through people's involvement that it can be controlled," says P N Arbani, regional advisor on malaria, who , Southeast Asia. "A change in policy is obviously needed," says Sharma.