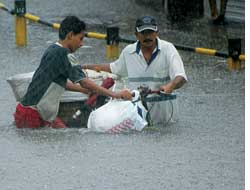 mumbaikars need to brace themselves for more disasters as extreme weather events such as the deluge on July 26, 2005 may not be a one-off event. The climate in Indian cities like Mumbai are warming up fast and this could be a recipe for more natural disasters, said the India Meteorological Department (imd). The regional imd office at Mumbai analyzed 100 years of weather data from 1901 onwards and found a rise of 1.62C in the average maximum temperature. The report was submitted to the state chief minister on May 11. 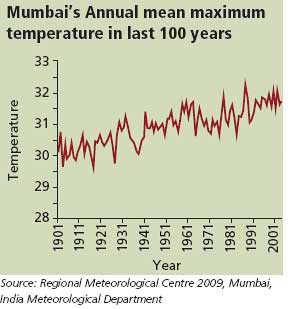 "Our analysis shows that the 1990s witnessed three times more natural disasters, like floods and thunderstorms, than the 1960s. Even drought-prone districts such as Jaisalmer and Barmer in Rajasthan suffered devastating floods in 2006...Since 1960s, expenditure on mitigation and reduction of such disasters has increased nine-folds," said R V Sharma, deputy director general of meteorology, Regional Meteorological Centre, during a recent press briefing (see graph Annual mean maximum temperature in last 100 years).

Between early 20th and 21st centuries, Mumbai registered a mean maximum temperature rise of 1.62C; this is a cause of great concern, Sharma said. It is not surprising that winters are giving Mumbai a miss, he added.


Is a rise of about 2C over 100 years really a matter of concern? Scientists warn such a rise has a direct negative impact on human health and food security.

"There is scientific evidence to prove that an increase of 1C in northern India's hilly areas means wider malaria window. Mumbai is seeing a surge in malaria, but as of now we cannot blame it on global warming. We have recently tied up with King Edward Memorial Hospital, Mumbai, to find out how diseases like malaria, dengue and asthma are related to global warming and climate change," said Rakesh Kumar, head of National Environm-ental Engineering Research Institute's Mumbai office, at a public meeting on 'Climate Change and Mumbai'.

Meanwhile, newspapers in Mumbai are full of reports on rise in malaria cases. Already 1,351 malaria cases have been reported till April this year, there were a total of 790 cases last year. The municipal corporation is blaming this on its inability to carry out the spraying of ddt and other anti-malaria measures as its staff is posted on election duty.

Though there is no clear pattern, Sharma claims that 2001 onwards rainfall over Mumbai has increased. This could be due to a change in the lapse rate or the rate of change of any meteorological element (temperature in this case) with altitude. The lapse rate determines the growth of clouds.

Could a steep lapse rate be the reason behind cloud burst on July 26, 2005, when the city received 944 mm rainfall in just one day?