In India, where 500 million people out of about 1,000 million depend on forests for their survival, any 'sweet-talk' about wood consumption is bound to elicit a strong reaction. A study suggesting India's forest cover has improved due to an increase in the demand of forest products evokes that 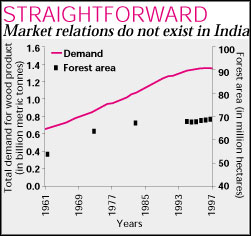 in india, where 500 million people out of about 1,000 million depend on forests for their survival, any 'sweet-talk' about wood consumption is bound to elicit a strong reaction. A study suggesting India's forest cover has improved due to an increase in the demand of forest products evokes that.

In stark contrast to traditional perceptions, the study states that people protect what benefits them the most, and therefore, land covered under forests has increased from around 10 per cent in 1971 to about 24 per cent in 1999. Villages registering a faster growth in the expenditure of fuelwood are said to have a greater forest cover. The conclusion is a perfect recipe to generate a debate in the country that deems its us $16.54 billion fuelwood market as illegal, and where poor people's needs are held responsible for the large-scale denudation of forests.

The work, by Mark R Rosenzweig of the Harvard University, usa, and Andrew D Foster of the Brown University, usa, was recently published in the prestigious Quarterly Journal of Economics. It is based on a detailed analysis of satellite images and surveys of 250 villages. The researchers found India conducive to study for two reasons: first, they assumed that most of the country's wood is used as fuel and fuelwood markets are limited geographically (in villages). Therefore there is a direct relationship between changes in the rural demand of forest product (induced by income and population growth) and the local forest growth. Secondly, India is a closed economy with high tariffs imposed on the import of wood products. As a result, even the slightest change in demand at a national level has pronounced effects on forests.

Their analyses telltales that since 1970 forest area has increased by 50 per cent and forest biomass by 37 per cent thanks to the number of village households doubling up. Despite a hike in prices, the consumption of fuelwood has gone up by 2.8 per cent per year on an average during 1961-1999. While examining the relationship between urban demand and rural forests, the researchers found that a 10 per cent increase in national income raises the probability of a household purchasing books or newspaper by 29.2 per cent and wood furniture by two per cent.

The paper also debunks inferences of a World Bank report, which credits the green revolution for the reversal of deforestation. As per the findings, a rise in crop productivity of 50 per cent led to a 55 per cent fall in forested area, a 65 per cent decline in forest biomass, and a 32 per cent increase in the proportion of the total land under cultivation.

Indian experts take the findings with a pinch of salt. They agree with the basic theory: people protect what is a must for their survival. However, they assert that financial incentive determines the behaviour of masses -- a fact neglected in the study. In India, it is not possible for a common man to cut a tree without 'official permission'. People grow more trees only when they know they can supply them to meet the growing demand. If property rights are not in place, which they are not in India, then a perfect market, as depicted by the researchers, cannot exist. Thus the study reflects a lack of understanding about markets and institutions of developing countries.

The paper creates another fallacy -- it is monoculture plantations, and not forests that have increased in the past few years. Their data about forest cover cannot be trusted, as satellite images do not show a distinction between plantations and forests. Furthermore, the data is from different satellite sources and resolution of Landsat 1 is different from that of Landsat 2.

The paper raises more questions than it answers. But one of them is quite interesting: won't life become much easier if the 'perfect market' was for real? The answer is not too difficult, especially for the Indian foresters.