Estimates show that India will produce 180 million tonnes (mt) of steel by 2020. Consumption of stainless steel has risen 14 per cent in the last 15 years in the country--higher than the global consumption of 6 per cent. Rapid urbanisation and growth in automobile, infrastructure and real estate sector aided the boom

India's total iron ore reserve is around 23 billion tonnes and this reserve is expected to sustain the steel industry for more than 50 years, assuming a constant 100 mt export of iron ore. India exports about 60 per cent of the iron ore it produces

In 1957, India had the capacity of 2.1 mt of steel. International Iron and Steel Institute in Brussels, says, in 2006, India produced over 44 mt of steel.It is the seventh largest producer of steel

116 agreements were signed in various states--mostly in Orissa, Jharkhand and Chhattisgarh--which envisage to add a production capacity of 150 mt, with a Rs 357,000-crore investment

Needs around 31giga joule thermal energy--equivalent to the energy obtained from 938 litre of petrol (11,256 km of distance travelled by a medium-sized car)

Generates around 625 kg of solid wastes 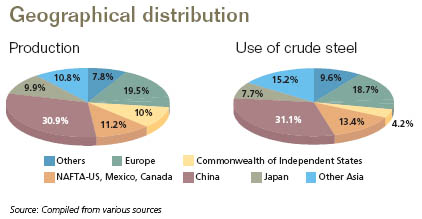 Iron and steel industry eats up 15 per cent of the total energy used by industries worldwide. Not resource intensive, iron and steel plants pollute water and air; among the largest emitters of toxic mercury and greenhouse gases (ghg)

In India, the industry contributes 15 per cent of the total ghg emissions. Raw materials are stored in the open and no proper regulations are in existence for unintended fugitive emissions, gaseous pollutants and green house gas emission in the steel sector. Estimates show that India will emit 486 mt of ghg by 2020

Recycling steel can help meet the growing demand for steel. Ship breaking for steel is, if carried out under an environmentally safe manner, is a safer alternative. More than 90 per cent of the steel can be recycled from ships