Jazeera along with her three children has been sitting in protest from June 14 in front of government offices, demanding protection of Kerala's sea coast 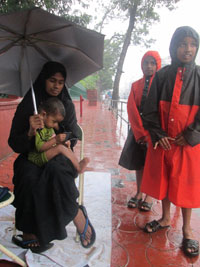 When Jazeera, 31, a resident of Madayi gram panchayat in Kerala’s northern district of Kannur, started a sit-in protest on June 14 in front of a police station near her village, everybody was stunned. First, she is a woman, and that too from a conventional Muslim family. Second, she was a mother of three—a toddler and two-school-going girls. To top it all, she is fighting against a strong nexus of sand miners, politicians, officials and the police. But nothing stopped her—the incessant heavy rains, cold winds that pierce the bones or the darkness of nights—from going ahead with her protest. She is fiercely dedicated to her mission—make the authorities protect the sea coast from sand mining.

“For eight nights and nine days I sat in protest along with my kids,” recalls Jazeera, who has now shifted her sit-in protest to the state secretariat gate in the capital city of Thiruvananthapuram. Her kids Rizwana, Rafzana and Muhammed are with her. “What I am pleading with the authorities is only to implement the existing legislation for protecting the sea coast,” she says while sitting in the rains under an umbrella, holding her son in her lap.

Watched coast near her home disappear

Jazeera was born and brought up in a tiny house on the seashore of Puthiyangadi area. Her father, the late Muhammed V, used to run a small shop on the coast. “Our sea coast was a beautiful and visited by many from outside,” recalls Jazeera. She developed an intimate relationship with the sea and the coast. Sea was her best friend. Jazeera was married off while she was studying in 10th class. The marriage broke up later. “I used to tell all my woes only to my sea, and when I was happy I used to roll on the sand,” she says.

She bought an autorickshaw with a loan in 2006 and started earning a living as an auto driver. She got married again in 2011 and left for her husband Abdul Salam’s home in Thalayolapparamba in the southern district of Kottayam.

When she returned to her parents' home for her delivery, she was shocked to see the plight of the coast. Many new apartments, flats and big houses and buildings had mushroomed close to the coast. Many were under construction. Since sand from rivers was not available as much as the builders wanted, they started using sand from the sea coast, says Jaseera. Sand was mined day and night in huge quantities and transported in trucks. The authorities had given permission to the locals for taking sand for their own use, and this was being taken as a cover for illegal sand business. A number of local unemployed youth and many from outside states like Odisha, Bihar and Tamil Nadu were engaged in sand mining. Most of the migrant workers were poor women.

“It never stopped and loads and loads of sand was taken away,” says Jazeera. Deep pits started appearing on the coast. The seawall was in danger. She observed that erosion has increased and the distance between her house and the sea has shortened considerably.

It was then that she decided to wage a battle against illegal sand mining. “The sea coast is not anybody’s private property, it belongs to all,” says Jazeera. If this is happening in Puthiyangadi, then the same could be the case with the rest of the coast in the state, she assumed. She learned later that in many places on the 500 kilometre coast of Kerala, illegal constructions and sand mining are taking place in violation of the law.

She had to start her battle first from her own home. “Two of my elder brothers were also engaged in the sand mining work,” recalls Jazeera. After a lot of fights, she managed to persuade them to keep away from sand mining. “Then I approached the village office, panchayat, police station, the district authorities and pleaded with them to intervene. I also appealed to the people engaged in mining. Nobody listened to me,” says Jazeera. The officials’ attitude was “poor people, let them live Jazeera”, she adds.

But she refused to give up. Despite having nobody to help her, she tried to block trucks by lying down in front of the vehicles loaded with sand, forced women workers taking head-loads of sand to put it back and recorded sand mining on her mobile. She was beaten up, had to face threats to her life, her house was damaged and mobile was snatched away at least twice. Rizwana, her elder daughter, a seventh standard student was slapped on her face while trying to protect Jazeera from being physically assaulted by a group of women workers. When she approached local media with photos and videos they accused her of trying to get publicity, says Jaseera. 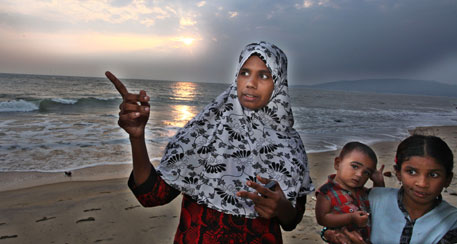 On July 10, she started her second round of sit-in agitation in front of the district collectorate. The district administration wanted to give her police protection but she refused. “Why should I have protection? It is the coast that should be protected and I asked them to do that,” says she. Her daughters always stayed with her and attended school in the morning. Since it is Ramadan month and fasting is going on, sympathizers offered her food in the evening at the time of breaking fast. Rights activists and a few other organizations started helping her.

Meanwhile, people from the child helpline accused her of making her kids suffer. “They accused me of not being a good mother and asked me to sign paper saying that I would take care of my little boy properly. I’m a mother and I know my responsibilities. Nobody has to teach me that. So I refused to sign that paper,” says an agitated Jazeera.

On July 20, about 1,400 people took out a protest rally against Jazeera for “not allowing them to engage in their traditional livelihoods”. According to her, local people, politicians, officials and media took side with those engaged in sand mining while she got support from people and political parties and the media outside her locality.

She is planning to continue her sit-in protest started on August 2, in front of the secretariat till she gets a written assurance from the chief minister. On Monday, Kerala Chief Minister Oommen Chandy called her to his chamber for a meeting and assured her that he would take necessary actions against sand mining on the coast. “Verbal assurance is not enough. I have given a submission in writing and have to get some assurance in writing,” she asserts.

Jazeera says that she is not afraid of anybody since she is a believer in god. Her husband, a madrassa teacher, gives her moral support and her mother prays for her. Her brothers, according to her, regret now that they did not support her when the whole locality opposed her protests. “What’s the point in living a long life fearing a few?” she asks. “ I prefer death to such a life.”

The Kerala Protection of River Banks and Regulation of Removal of Sand Act, 2001