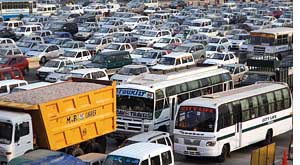 After a gap of 14 years, the Union Ministry of Urban Development commissioned a study on the state of transport in Indian cities. The data showed Indian cities sinking deeper into a spiral of congestion and air pollution--public transport showed a decline across the country as private automobiles replaced non-motorized transport like bicycles.

Since 1994, this is the first such study. Though 87 cities qualified for it, the study covered 30, considered representative of urban India. These were split into six categories: if small hill towns came in the first, metropolises like Mumbai came in the sixth group.

The cities were tested on eight criteria (see box). Chandigarh was rated the best, followed by Delhi and Madurai. Gangtok was the bottom of the table. Vehicle numbers grew at a rate of 10 per cent in Indian cities between 1991 and 2001. Of this, two-wheelers, which constitute 60-70 per cent of vehicles registered in most cities, grew at 12 per cent over the last two decades.

Public transport is going the other way. Rather than increasing in numbers to meet the demands of rapidly increasing population and urbanization, the bus fleet of all state transport undertakings shrank between 2000 and 2007. The only exception was Bangalore. Many small and medium-sized cities do not have a proper bus system, relying on auto-rickshaws; they include Gangtok, Bikaner, Raipur, Amritsar, Agra and Patna. The metros have better public transport; Kolkata had the highest share of public transport among them.

The share of public transport declined between 1994 and 2007 in all cities except Kochi, where it is 51 per cent. The study projects a significant decline in public transport and sharp increase in private vehicles in the future, especially in the metros.


The study found the result of this trend: congestion. Chandigarh's wide roads mean the average speed on its roads is nearly 30 km per hour, the high est. Hyderabad and Chennai move at 19 kmph, with Bangalore and Kolkata trudging at 18 kmph. Delhi and Mumbai crawl at 16 kmph, the slowest.

The study emphasized that public transport best reduces congestion and pollution, but did not suggesting how to make it efficient. It stressed the need to integrate urban planning and transport planning, a major gap in the planning and management of Indian cities.

Take the case of Pune, which topped the category of public transport accessibility--smaller cities scored high generally, but that is because the trip lengths there are smaller, said Adhiraj Joglekar, a physician active in the community. Pune's public transport is not that good, he said. "Access means the capacity to enter and exit a transport system. Effectively it means how soon will one get a bus. Accessibility is the measure of the capacity to reach different locations." The study wasted the opportunity to examine this critical aspect, he said.


The study pointed out something that is known but seldom recognized: depending on the city, 16 per cent to 58 per cent of all trips are made on foot. Although the metros provide better room for pedestrians than smaller cities, it is inadequate.

According to a recent survey, 90 per cent pedestrians feel unsafe on Delhi roads. It noted the absence of zebra crossings at a high proportion of traffic intersections; pedestrian signals were almost non-existent. Refuge islands (places for pedestrians to stand on medians or dividers) were found on only 10 per cent intersections. Kanthi Kannan of the non-profit Right To Walk Foundation in Hyderabad said the ministry's study should have compared pedestrian infrastructure in the past with the present, and given specifics of each city.

The share of cyclists in transport declined to 11 per cent from 30 per cent in 1994. Kannan said private vehicles are the biggest encroachers on Hyderabad's footpaths. But the study did not suggest measures to contain parking demand. It said merely that large cities have lesser on-street parking on major roads as compared to smaller cities, because of better enforcement.

This bland mathematical analysis is pointless, said Ashok R Datar of the non-profit Mumbai Environmental Social Network. "The criticality of blocking a lane in high-volume traffic in major cities, where buses need the curb lane for getting into and out of bus stops, is material. In small cities without bus service, parking on roads is not all that bad."