To study Down syndrome 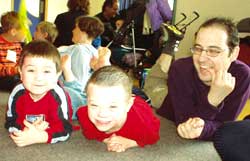 researchers in the uk have developed a mouse model to understand the Down syndrome and explore ways to treat it. The effort by scientists from the National Institute for Medical Research and Institute of Neurology at University College London marks the first time a major part of a human chromosome has been inserted into the mouse genome.

Down syndrome is a genetic abnormality that occurs in 1 in every 750 births. It is caused by the presence of three copies of chromosome 21 instead of the normal two. The disease belongs to a class of disorders called 'aneuploidies' where the number of chromosomes is either more or less than the normal. Little is known about aneuploidies that occur in at least 5 per cent of all pregnancies and can cause illness, death and miscarriage.

The model was developed by introducing about 90 per cent of the 250 genes on human chromosome 21 into the embryonic stem cells of mice. Some of these genes are present in mouse and introduction of the human chromosome results in three copies of the gene The scientists found the resultant mouse strain had problems with memory, brain function and heart formation. This is similar to the problems seen in people with Down syndrome. The study appears in Science (Vol 309, No 5743, September 23, 2005).

"The animals will also be useful in working out which genes on chromosome 21 are responsible for which of the many disorders like heart defects and leukaemia that people with Down Syndrome are more likely to get," says lead researcher Victor Tybulewicz.