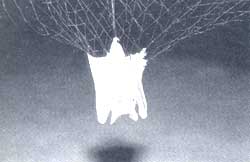 BATS. THE very mention of the word conjures up chilling images of bloodsucking creatures that attack humans insidiously at night. Much maligned in fiction -- who will ever forget the evil Count Dracula? -- these animals have been extensively exterminated over the years.

Estimates presented by the Chiropteran (bats belong to the order Chiroptera) Species Survival Group of the International Union for Conservation of Nature (IUCN) at a recent international conference on bats in Madurai, indicate four species of the 161 fruit-eating bats had become extinct and three other species -- including a fruit bat (Latidens salimalii) that is endemic to India -- may also be extinct.

But this is only a part of the picture. Estimates concerning the large number of species of insect-eating bats, which are still being prepared, are likely to indicate more species that have disappeared.

In a review of the research on bat conservation, 112 national and international experts meet once every three years. Their ninth such conference was held in the first week of August at Madurai Kamraj University.

With 950 species extent, bats form the second largest mammal group in the world. Contrary to common belief, the majority of bat species live on insects or fruits, and only three species are blood suckers -- all found only in tropical America. Insect-eating bats eat prodigiously and help to control pest populations. Estimates indicate that some of the larger colonies of Mexican free-tailed bats eat upto 6,000 tonnes of insects in a summer. Fruit bats, on the other hand, help in pollination and seed dispersal. Scientists say these bats eat, digest and defecate fast, and travel long distances, which helps in seed dispersal. Researchers have found that in areas inhabited by fruit-eating bats, or flying foxes as they are called, at least 289 plant species rely in varying degrees on bats for propogation. These plants, besides being ecologically important, also produce 448 economically viable products.

Moreover, bats are used in scientific and medical research, as many of their physiological systems are similar to that of humans. For instance, a bat's sonar system led to the invention of devices that help the blind to move about freely.

But conserving these "natural pollinators" has usually been a low-priority item. In order to protect people, crops and livestock, bats have been poisoned, blasted with dynamite, asphyxiated by burning tyres or entombed alive by the millions in caves and mines.
In India, bats are not protected. They are listed as vermin under the Wildlife act, along with rodents and crows. The archaeological department, for instance, has been known to kill thousands of bats when fumigating monuments. The delegates at Madurai appealed to the Central ministry of environment and forests to give bats more protection by changing the status of the animal in the Wildlife act.

There are other problems, too. "Very few field studies on bat ecology and behaviour have been carried out," says Dr. S.P. Goyal of the Wildlife Institute of India at Dehra Dun.

Sharouck Mistry, a researcher at the University of New Mexico in USA, who presented a paper on a fruit bat community in Sikkim, stressed, "We basically need to undertake status surveys in various areas." Contending that nobody is monitoring the population of bats in the country, Mistry said, "There are 12 species of fruit bats in India. Of this only three -- Pteropus giganteus, Rousettus leschenaulti and Cynopeterus sphin -- are commonly known. Economically important plants such as banana, mango, guava and dates are pollinated by fruit bats. The three common species of fruit bats pollinate or disperse the seeds of 50 species of plants."

Indian delegates at the conference, however, formed the Bat Society of India, a move that may prove to be the first vital step to protecting the bat in India.