Mumbai hit with diseases after rains 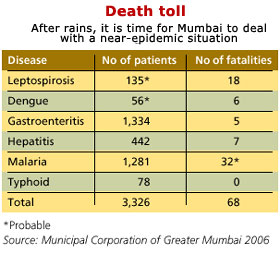 after the monsoon deluge, Mumbai has witnessed an outbreak of diseases such as malaria, dengue and leptospirosis, taking the death toll to 68 on August 2. The pace at which people are dying is alarming. Besides, Mumbai has recorded an increase in water-borne diseases like typhoid, hepatitis and gastroenteritis, caused due to contamination of drinking water supply. A total of 3,326 people have fallen prey to these diseases (see table: Death toll).

Most patients belong to low-lying areas like Dharavi, Kurla, Byculla, Parel, Andheri, Saki Naka and regions in and around Borivali. While Municipal Corporation of Greater Mumbai (mcgm) officials claim the situation is under control, the crisis is far from over. "There is no outbreak and the number of causalties are very much in control. mcgm was prepared well in advance.We have cleaned up the Mithi River, strictly supervised drains, banned thin plastic bags, organised awareness programmes, trained doctors, stocked adequate medicines like deoxycyclin for leptospirosis," says Neera Kevalramani, deputy executive health officer, mcgm.

But Kevalramani does not focus on the haphazard construction activities in the city that have blocked most water channels (see 'Nothing August About Mumbai', Down To Earth, September 30, 2005). Experts warn that another bout of rain will ensure the situation turns into an epidemic. Says Arun Bal, a health expert with Mumbai-based Association for Consumers Action on Safety and Health, "These diseases cannot be controlled by medicines. Proper sanitation and prevention of water stagnation is a must, both of which are missing in Mumbai."

According to media reports, doctors in mcgm hospitals are themselves down with fever. Leptospirosis is caused by a spirochaete bacterium and is transmitted by the urine of an infected animal. Both dengue and malaria are spread by mosquitoes.