Authorities shrug off questions about liability 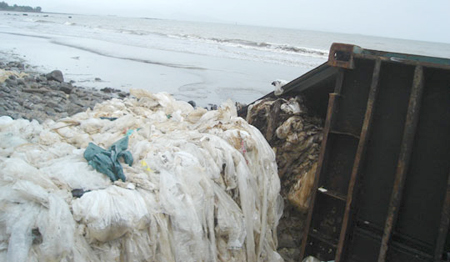 Two cargo ships collided off the Mumbai coast on August 7 causing an oil spill that spread quickly through Maharashtra's coastline. MSC Chitra ruptured its tank when it hit incoming MV Khalijia and ran aground at Colaba, near Prongs Reef Lighthouse. The vessel contained about 1,200 tonnes of fuel oil in its tanks of which 800 tonnes spilled into the Arabian Sea before the leaks could be plugged two days later.

The collision damaged Khalijia's prows. Chitra tilted precariously at a 75o angle which caused 400 containers on its deck to fall off and float in the sea. Some of these containers had toxic organophosphate pesticides (See Also: Dangerous cargo).

In scale, the spill was much smaller than the one in the Gulf of Mexico in April. But it is proving a major threat to the marine ecology of the area and the coast. "Entire mangroves in our area turned black. It was a scary sight," said Dipesh Khattu, a teenager from Pirwadi village in Uran taluka of Raigad, one of the affected districts about 100 km from Mumbai. But the extent of the damage would be known only after the oil spill's environmental impact is assessed.

The Union environment ministry has hired the services of two research institutes—the National Environmental Engineering Research Institute (neeri) in Nagpur and the National Institute of Oceanography at Goa—to assess the impact of the spill. The Indian Oil Corporation will study the marine life in the affected areas.

Initial observations by non-profit Bombay Natural History Society (bnhs), conducting its own ecological assessment study, indicate the slick has spread to the beaches in Alibaug in Raigad, 108 km from Mumbai. Deepak Apte, assistant director of bnhs, said two scientists groups from the organization would look into how the mangroves have been damaged and the impact of the oil on the ecosystems. The non-profit will complete its rapid assessment study in three months.

Ecologists said the picture is grim. "The oil spill will affect fish species; many of them breed in mangroves. The chemicals sprayed to disperse the oil too would affect the marine ecology," said B F Chhapgar, a marine biologist. "The chemical dispersants break the oil into small droplets which then settle at the bottom of the sea and affect marine life," he explained. Chhapgar also expressed concern over the threat posed by the chemical containers still afloat in the sea. If the pesticides leak, marine animals would be severely impacted, he said.

The oil spill caught the government agencies unaware. The state pollution control board (spcb), the state environment department and the port authorities could provide no details as to who was liable. "We are dealing with the present incident not as an oil spill but as an accidental discharge as defined in the Environment Protection Act (epa) of 1986. There is no law covering oil spill as such and the consequential environmental damage," said Y B Sontakke, regional officer of spcb stationed in Mumbai. So, the fir was filed against the companies under epa and the Indian Penal Code sections relating to rash navigation (Section 280) and endangering life of others (Section 336).

The agencies passed the buck to each other when asked about fixing liability and responsibility. Though the Maharashtra spcb has released

80 lakh towards initial clean-up operation, its officials claimed it was not the responsibility of the board to fund the cleaning.

Minister of state for environment Jairam Ramesh informed the Rajya Sabha that both shipping companies would be made to pay the clean-up cost. But it is not clear how they would be made to pay since the ships bear foreign registration; Chitra is registered in Panama while Khalijia is registered in St Kitts. Liability is covered by the International Convention on Civil Liability for Bunker Oil Pollution Damage of 2001, but India is not a signatory to it. (See Also: India pledges to sign Bunker Convention after the spill).

State environment secretary Valsa R Nair Singh said a maritime lawyer, hired by directorate general (DG) for shipping at Mumbai, would conduct negotiations with the polluters for compensating all claims. When contacted, joint director general of shipping, Satish Agnihotri, denied this. "DG-Shipping will not make claims for any other agency. All concerned agencies would make separate compensation claims," Agnihotri said, refusing to comment on liability.

Contingency plan only on paper

Only one document deals with the subject—the National Oil Spill Disaster Contingency Plan of 1996 (See Also: What the disaster plan says). The document was issued by the Ministry of Defence in 1996; it was last updated in March 2006. The nos-dcp, as the plan is commonly known, gives the Indian Coast Guard the mandate to co-ordinate with state departments, ministries, port authorities and environmental agencies to assist in oil spill cleaning operations.

It mandates that all major ports in India should have basic, minimum equipments, like inflatable booms and oil skimmers, to tackle oil spill. It also specifically states that the Mumbai Port Trust should have a tier-I response system, capable of handling oil spills up to 700 tonnes. The Mumbai oil spill exposed lack of preparedness of the port trust; it could provide no help to the Coast Guard. The Jawaharlal Nehru Port Trust that shares the Mumbai port's navigational channel, was of no help either.

—with inputs from Rajil Menon