The proposed extension to existing Bandra-Worli sea link in Mumbai—the Worli-Haji Ali Sea Link—may be abandoned in favour of another expensive road project. The government of Maharashtra has accepted the proposal for a coastal toll road connecting Nariman Point and Malad along the the western coast of the city.

Evironmental activists are opposing the project, saying it violates Coastal Regulation Zone (CRZ) rules and will damage the coastline and mangroves. They have appealed to the Centre to reject the “road to disaster”.

Sources in the state government say the state government will not approach MoEF for CRZ clearance for the freeway project. The expert committee recommends that the state government should make necessary amendments to the CRZ notification to allow land reclamation  to expedite the project. It has suggested an environmental impact assessment (EIA) report  for which consultants accredited with the Quality Council of India will be roped in.

The report says the project will ensure faster vehicular movement which has slowed over the past one-and-half decade. According to a survey by the state government, the average speed of vehicles on the city roads is 8 km per hour during peak hours. The committee claims that vehicular pollution in the city, which has increased by 68 per cent over the same period, will also decrease if the coastal road is built.

The committee quotes international scientific studies and says that pollution and fuel consumption is minimum at the speed of around 55 miles (88.51 km) per hour and says vehicles could be driven at higher speed along the freeway.

Mangroves to be reclaimed 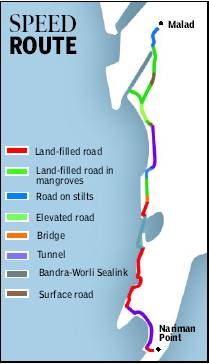 The freeway will be a combination of coastal road on reclaimed land, bridge, elevated roads and tunnels as well as road stretches on existing land (see map).

The freeway will have 18 exit and entry points at strategic locations. The plan envisages 75 hectares of green open spaces and waterfront along the road. The report prepared by the committee says reclamation up to 100 metre will not have any adverse impact on tidal movement and the coastline. According to the plan, total length of land reclaimed from the sea and mangroves would be around 26 km.

The report suggests a non-stop electronic toll collection point at every entry into the freeway and recommends that a professional agency like Delhi Metro Rail Corporation should be roped in to take care of concerns like asset management. The committee has projected the plan as quantum leap towards improving quality of life in Mumbai. Since there is no need of land acquisition, it will be an added advantage, the committee says.

City based non profit Vanashakti, says the project is environmentally unsound. “Reclamation of 100 metre from the sea in an island city is fraught with environmental dangers. The wetlands of Mumbai and Thane are already being handed over to private builders after fabrication of data to clear proposals from the MoEF. The state government is doing everything possible to destroy the very essence of the CRZ laws, which are meant to protect the fragile coastlines and wetlands of our country,” says Stalin D, project director of the non-profit in a letter to the Union environment minister Jayanthi Natarajan.

Vanashakti says such large scale reclamation will lead to beach erosion and change tide patterns. Huge stretches of mangrove forests will be destroyed and no amount of compensatory forestation can justify the loss of a wetland, it adds. “It would be interesting to study what kind of results the so-called compensatory forestation done in the past ten years has yielded,” says Stalin.

The state government’s desire to promote the destruction of the marine life along the coastlines, the wetlands and also the mangroves is a venture which must be shot down at the planning stage itself, says the letter.  The non-profit says the government should explore the cheaper and environmentally viable option of water transport, which is most suited for a coastal city like Mumbai. “It would entail minimum destruction of mangroves and wetlands and also does not require land reclamation from the sea,” says Kavita Mallya, project officer with Vanashakti.

The NGO says the proposed coastal road may not ease congestion. The Bandra-Worli Sea link has low traffic volume because the toll charge is deterrent for most motorists. “What's more, the cost of the road project could triple by the time it is completed as is the case with many other projects. The main point here is that the MoEF must not allow this rampant abuse of the CRZ laws, the wetland and mangrove protection laws which are in place. One exemption was made in the case of the Navi Mumbai airport with a solemn promise from the MoEF that it would not be repeated,” Stalin points out.

Environmentalist Girish Raut, too, termed the project as a blunder that would push the city to the verge of disaster. “The coastal freeway will not ease traffic in the city. The only outcome of the freeway would be adverse impact on marine ecology,” says Raut. He adds that several flyovers have been constructed in the city since 1995, but there is no respite from traffic congestion. According to Raut, the coastal freeway would lead to flooding, destruction of storm water and sewer drainage and all the sandy beaches of the city would be destroyed. “The Bandra-Worli Sea link has already destroyed sandy beaches along its length. Now the coastal freeway will destroy the remaining,” says Raut.