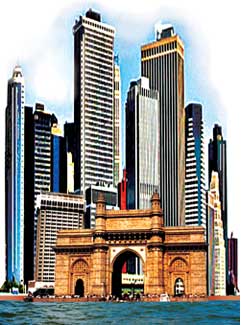 Planners say it will add problems

if mumbai municipality's vision for the city in 2034 comes true, its skyline will have more skyscrapers and sky gardens atop buildings will be where people will head for in the morning.

The civic body's proposal became public when it floated tenders inviting international consultants to carry out studies to prepare the city's revised development plan (DP). The consultants will conduct land use surveys, prepare population and employment projections and compile data for public transport. The DP is to come into force by 2014 and will govern development projects for the next 20 years.

As per the tender document, open areas of the city like the salt pan lands on the outskirts and areas that fall under coastal regulations will be unlocked for the construction sector; these were no-construction zones till now.

On September 1, the city's municipal commissioner Jairaj Phatak said the best international consultants would be hired for the job.

Urban planners and activists called the plan ill-conceived. Further unregulated construction, they said, will add to existing urban chaos. "Mumbai has a very high population density of 27,000 persons per sq km as against 14,350 in Chennai and 11,050 in Delhi. Further urbanization will be disastrous for the city," warned Pankaj Joshi, an architect and executive of Mumbai-based non-profit, Urban Design Research Institute. Joshi pointed out that development in no-construction zones would reduce availability of open space per person to less than 2 sq m against the norm of 11 sq m.

Citizens groups said DP is not about drawing skills and imaging but an assessment of the needs of the people and outsiders would not be able to do so. "A development plan ought to be a people's plan, not an investment plan for the next 20 years," said Cyrus Guzdar, industrialist and activist.