Mumbai suburbs gets a landfill site for hazardous waste 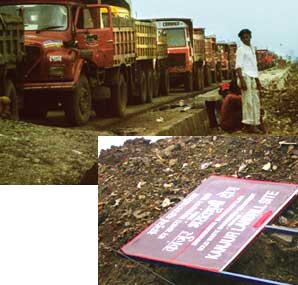 A recent paper, Hydrochemistry of Mithi river and associated sediments, Mumbai, authored by three scientists of the Indian Institute of Technology-Bombay, validates experts' objections. The paper notes: "the Mithi river is highly polluted due to raw sewage and industrial effluents discharged into the river between Saki-Naka and Kurla. Zinc and copper have been found and the sediment samples are higher compared to the Arabian Sea. These metals are entering the food chain through cuttlefish and aid in the growth of Culex quinquefasciatus mosquitoes ... cuttlefish is widely sold in the urban market that provides easy access pathway into the human food chain" (see table : Toxic cocktail). Culex quinquefasciatus are common carriers of West Nile virus and are also linked with Murray Valley encephalitis that leads to impaired neurological functions. The study also found an increased input of metal load.

Studies conducted by the Maharashtra Pollution Control Board (mpcb) have also found toxic elements in the silt. In its July 2004 report, the mpcb found cyanide and high (over 10 milli gram per litre) levels of oil and grease, besides zinc and copper. It then wrote to the Mumbai Metropolitan Regional Development Authority and mcgm warning them about the toxic presence. Environmentalists also raised their voice against untreated waste but mcgm officials claim they are "treating" the toxic silt with lime powder which "neutralises" the toxicity.

There are other threats such as contamination of food chain, destruction of mangroves, increased flooding and other health hazards. Almitra H Patel, member of the Supreme Court committee for solid waste management for Class 1 cities, who visited the site in October 2005, said that the landfill was against the Solid Waste (Management and Handling) Rules, 2000.

In her letter dated November 3 to the mcgm, she wrote: "... it is vital for a 500-metre wide buffer zone of no-development to be declared (around the landfill site) in the town planning department's land-use plans... The buffer zone around the site can and should have mangroves, on undisturbed ground to provide a sufficiently wide channel for tidal movement and flood prevention." None of these suggestions are being followed. Says another researcher: "The toxic chemicals in the silt will get into the mangroves habitat and from there to the Thane creek. There are chances of bioaccumulation and biomagnification of harmful elements in the food chain. It may affect over 206 species of birds found there."

Raj Kumar Sharma, an environmentalist, alleges that the Supreme Court cleared the site for waste dumping because it was not aware of the existing mangrove jungle and eco-sensitiveness of the area. While mcgm claims it is developing the dumping yard based on a technical report, the fact remains that their efforts are one-track and can only result in further damage.