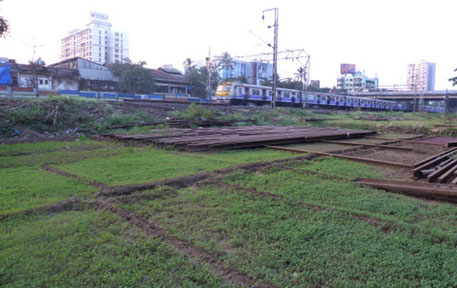 Mumbai’s local trains are mostly crowded and people inside are usually too busy trying to find a foothold. But if one has the time to look out of the window, it is quite possible catch the sight of vegetable farms along the railway tracks. Farmers growing vegetables along the tracks in the suburbs and inside the city is a common practice in Mumbai. Curious, we went and spoke to few farmers near the tracks. They informed that the land belongs to the railways. The railways gave the land on lease to keep it clean and prevent encroachment from nearby slums, they said.

Ramkishore Chauhan, who farms vegetables between Elphinstone Road and Lower Parel railway stations in the middle of western and central lines, says his family has been cultivating the land for the past 25 years. “Land here is fertile and we harvest a crop every month,” says Chauhan who lives in a small hut. He comes from Faizabad; his family owns some agricultural farm land there as well. Farming in Mumbai brings his family extra income. According to him, most farmers along the railway tracks come from Faizabad and nearby areas. “We grow fenugreek, spinach and radish, among other things,” he says. He invested in a diesel pump to draw water from the nearby drain to irrigate the farm. “We do not have electricity to draw water nor do we have electricity in the hut. We grow crops all year round. During monsoons when heavy rains flood the field, we grow lady's finger as they grow into tall plants and stay above the flood water.”

Chauhan, along with the other farmers, are well aware of the fact that they will have to leave the land the day railway authorities want them to. Jitendra Chauhan, who farms on railway land south of Dadar station, says, “If the railways asks us to leave today, we will leave.” He hires people to work for him and pays them a daily wage. “We don’t have to go to the market to sell the vegetables; the shopkeepers come and buy directly from us. Sometimes, customers directly come to us to buy fresh vegetables,” says Jitendra, who is married with two kids; his family stays in Faizabad as they have no place to stay in Mumbai.

Living on the railway farmland with a family could be a difficult thing but that did not stop Ramkripan from bringing his family from Jaunpur in Uttar Pradesh. He lives with his wife and three kids in the north of Goregaon Station along his fields. He also does not have electricity in his hut but “having your family at your side is always good,” he says. Apart from the fields where he grows vegetables, he also has a small poultry with few chickens. He visits his village every year during monsoon when his land gets submerged by water. “The railways have given us this land to keep it clean,” he says, adding “every day we clean the area of the garbage thrown from the trains by the commuters.” 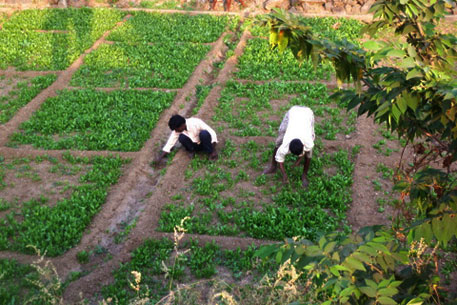 The farmers use dung as manure for their fields. There are few dairy farms in Mumbai, Aarey milk colony is one of the biggest, and farmers buy manure from them. A few farmers face problems while procuring the manure as a wall was built seven years ago cuts few of the farms from the town. Last year, Kanta yadav, who farms north of Goregaon station, had to pay a fine of Rs15,000 to Brihanmumbai Municipal Corporation (BMC) as the truck which brings the dung dumped it on the other side of the wall. Yadav claims that her family has been farming on the land for past 42 years. She complains the wall makes her feel unsafe; if she encounters goons or thieves in her farm, it is impossible for her to seek help.

A walk along the railway tracks from one farm to another can be a pleasant experience. One cannot hear the trains coming from behind until they are very close and we thought life as a farmer could be dangerous here but we never heard of farmers here dying in train accidents. After talking to so many farmers the thing which was still not very clear was, how did they all receive the land for agriculture from the railways? What were the criteria for the allocations?

The spokesperson of Central Railways, A K Singh, who sits at Chhatrapati Shivaji Terminus (CST) had the answers. “To protect the railways’ land from encroachment by slums and to keep the non-utilised land under use, we started a scheme in called Grow More Food,” he explains. “Under this scheme, 238 Class III & Class IV railway employees were allotted land on lease to grow crops. This would help them bring some extra income home and the railways would also generate some revenue out of the unused land.”

Generally, the railway employees outsource the land to other farmers who are known to them. According to Singh, maximum cultivation is in the central line between CST and Kalyan. The railways earlier charged a nominal annual rent of Rs 1,250 per acre (0.4 hectares) but the rates were hiked in June 2010. The land is now leased for Rs 4,047 per acre per annum. “Though 400 acres of railway land is under cultivation and railways earns good amount of revenue each year, our prime motive is to keep encroachers at bay,” says Singh.

A few years back there were newspaper reports on how gutter water was being used for irrigating farmland leased by the railways. These stories were followed by demands on banning farms along the railways tracks because sewage water posed a health threat. To this, Singh says, “In 2011 we sent samples of vegetables grown from ten different places along the tracks to the government accredited food testing laboratory and the reports were all good, stating vegetables grown along railway tracks are fit for human consumption.”

In a city like Mumbai every inch of ground is highly priced. The cost of a small piece of land can easily go up some crores; an initiative like this by the railways is noteworthy. Taking a cue from the railways if other office and departments also start growing food with whatever capacity they have, it can actually go a long way in food security of our country.