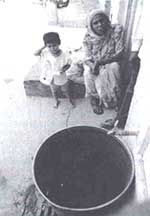 RESIDENTS of Savitri Nagar in south Delhi are suffering from water-borne diseases and don't know who to turn to. They blame the Delhi Water Supply and Sewage Disposal Undertaking (DWSSDU) for the deaths of eight people, apparently brought about by these diseases, but the authorities disclaim responsibility.

Hundreds of other residents in this low-income section of Savitri Nagar have also been afflicted by diseases. But DWSSDU insists, "Analysis shows the quality of water supplied to Savitri Nagar is wholesome and potable." The assertion is in stark contrast to what residents of the area have to say. Alleges Dhara Singh, "For the past few months, we have been getting murky water from our taps."

Municipal Corporation of Delhi (MCD) additional commissioner Pradeep Singh, who heads the committee investigating the case, maintains, "The source of contaminated water has not been ascertained."

The suspected source of the infected water is a recently renovated well. Almost all families who used the community tap that supplies chlorine-treated water from the renovated tubewell have fallen ill. Says Madan Lal Khurana, Bharatiya Janata Party MP from the area, "The authorities never bothered to test the quality of the water or clean the tubewell properly."

While MCD officials insist studies confirm the tubewell is clean, samples collected immediately after the disease-outbreak showed its chlorine content was less than the required level of 0.25 particles per million (ppm). Officials claim subsequent cleaning raised the chlorine content to about 1.75 ppm. They admit that at least in one instance, water was contaminated because of a leak from a sewer line, but claim the water quality improved after they rectified it.

MCD's health department has tried to make out that most of the deaths occurred before the tubewell was commissioned. It also insists there was only one case of water-borne gastroenteritis and that three others were cases of infant mortality, dehydration and acute malnutrition. Officials say only 40 cases were reported since May 15.

However, Pravin Gogia, vice president of the Indian Medical Association, says the figure is much higher. After an MCD medical camp opened in the area on June 26, about 300 villagers, mainly children, complained of vomiting, diarrhoea and high fever.

Regardless of the buck-passing, what is perturbing is that doctors have not been able to identify the nature of the illnesses. And, MCD officials are refusing to comment on the results of blood tests.

The villagers are losing patience. "Don't we have a right to know what is wrong?" asks Ishwar Das. An ailing Ramkatori, giving vent to her anger, says, "Jo jine ke liye pite hain, wohi marta hai. (What we drink to live, kills)."