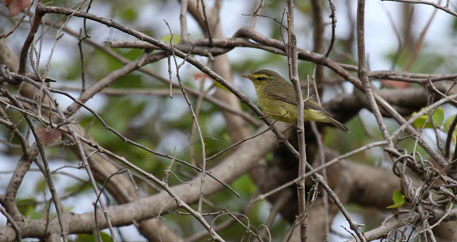 Nagpur city bird lovers just got a shot in the arm after a recent one-day bird count revealed that the city boasts of no less than 200 species of birds, including a host of rare and migrant species. The findings follow a day-long bird-spotting exercise by 150 experts and amateur bird-lovers from all over the city as part of the 9th annual Nagpur Birdrace, an event coordinated by city-based non-profit, Society for Wildlife Conservation, Education and Research (Wild-CER), supported by HSBC.

Talking to Down To Earth (DTE), Wild-CER director Bahar Baviskar said that bird surveys were undertaken at waterbodies and other bird hot-spots in and around the city, including the Futala, Ambazari, Goregaon and Sonegaon lakes and botanical garden within the city, and at select locations around the city like the Paradgaon, Surabuldi and Haladgaon lakes.

The most impressive find at the event was the rare Tickell’s Leaf Warbler, spotted by a group of students from the Ramdeobaba College Engineers for Environment Forum (RCEEF). Sneha Gupta, one of the students, said that warbler species, due to their small size and similar patterns, are difficult to distinguish from each other. This particular species, easy to confuse with the sulphur bellied warbler, was a particularly unexpected find.

Another unexpected outcome of the event was the spotting of around 60 to 65 species of birds in the MIHAN SEZ area, located on the outskirts of the city. “The results of this year’s finds are similar to last year’s,” said Baviskar, a wildlife veterinarian by profession, “And we are concerned that this rich bird habitat might be degraded by the proposed industrialisation of the area, which will lead to tree felling, decimation of the grasslands and pollution of water bodies.” He said the rich bird hotspots like the SEZ area need to be protected instead of being turned into hubs of hectic industrial activity.