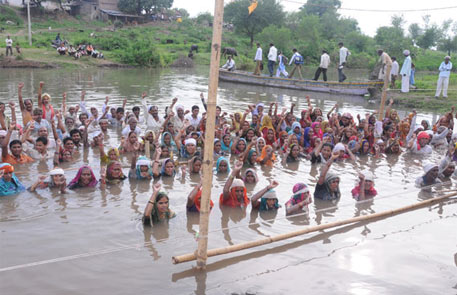 The Madhya Pradesh High Court has slammed the Narmada Valley Development Authority (NVDA) for shoddy construction of irrigation canals connected to Omkareshwar and Indira Sagar dams on the Narmada river. The court has asked NVDA to compensate farmers who incurred crop losses because of the incomplete canal work in Khandwa and Khargone districts of Madhya Pradesh.

The Indore bench of the high court, comprising of Justice A M Khanvilkar and Justice Shantanu Kemkarm, in their order dated June 25, said the compensation should be made as per the provisions of the new land acquisition Act of 2014.

The bench had asked social activist Medha Patkar and NVDA in February to submit suggestions to the court because neither the state government nor NVDA had estimation on the losses incurred by farmers because of the two irrigation projects.

Water logging a major problem in command areas
The suggestions filed by Patkar says farmers have been facing crop losses for the past few years because of water logging and dumping of the muck on their fields from the canal construction works. Her report also highlights that none of the projects have disaster management plans. It also states that the water logging, caused by poor construction, was leading to health risks such as malaria.

It admits that the the micro-irrigation plans for command area development for the villages under the two projects had not been shared with the village user committees.

When the court asked NVDA if it had mapped the number of villages facing water logging, the body did not produce any records. The court, therefore, asked NVDA to prepare a disaster management plan and map the villages facing water logging. The order states the farmers can approach the district collectors with compensation claims, who will determine the compensation amount and direct NVDA to pay the same.

Command area development neglected
According to an earlier report filed by the Ministry of Environment and Forests (MoEF) in the ongoing case in Madhya Pradesh High Court in February 2014, out of the proposed 36,000 ha to be developed in the first phase of the “on-farm development (OFD) works, which includes developing micro-irrigation plans, estimating the demand of water from these projects, works in only 3,700 hectares have been completed in Khandwa and Khargone districts. MoEF’s expert committee, which visited the area last year, observed serious lapses like “deficient design and planning, inadequate attention to operation maintenance, canal development works and link drains not concurrently constructed, and no restoration, even after breaches in August 2013 till January 2014”. The committee highlighted poor quality canal work causing severe damage to farmers and demanded that penalty be levied on the contract agency for the same.