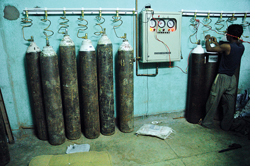 The final report of the third National Family Health Survey (nfhs-3) is out, but doubts remain whether it will be used to improve national health policies. Although 100-odd research papers have been written using data from the previous two national family health surveys--in 1998-99 and 1992-93--they have contributed little to policies.

G C Chaturvedi, director, National Rural Health Mission, asserts that "we are in a powerful position to move forward with more effective policies and programmes", but there are few examples in the past of how nfhs has helped.
Though only half the women in the country have access to medical care during pregnancy and delivery, the good news is that fewer children are being born. Infant mortality is low but immunisation coverage is still poor--it has decreased in 11 states. Anaemia and malnutrition are still rampant and even obesity is more prevalent now, says the report released by the Union Ministry of Health and Family Welfare on October 11.

In some cases the survey also points out which health schemes are failing. For example, the survey says that integrated child development services are not being used to potential. The service caters to the health and nutrition of children below the age of six and pregnant and nursing women.

Basic living conditions need improvement--more than half of the people interviewed did not have toilet facilities, half the households needed to travel to get drinking water and half the families used solid fuel for cooking.
"Though the data generated is significant, there is no startling information. The survey needs to be interpreted correctly by government departments and policymakers," says Amit Sen Gupta, public health expert with the Delhi-based Centre for Technology and Development.

He points that even if specific policies are formulated, lack of interest and investment in the health sector ensure they are rarely properly implemented. "Concern over maternal mortality had earlier led to specific programmes targeting pregnant women but they did not help as adequate investment was not there. The common minimum programme suggested that 4 per cent of the budget be put in health, but we have still not done that," he adds.

Agrees Mahtab S Bamji, emeritus scientist, National Institute of Nutrition, Hyderabad: "Larger allocations are needed in social sectors. For example, the midday meal programme provides only Re 1 per child per day." Sharda Jain, director, Centre for Women Care and Research, however, rates the survey as "very important" but adds that different results from other health surveys could confuse policy-makers.

Most analyses on health use National Sample Survey (nss) data also. " nss uses expenditure to judge a person's income, while nfhs uses an asset index. With people spending more on assets like televisions and cell phones even when they don't have food, the comparison is skewed," says Nilangi Sardeshpande, research officer with the Pune-based health ngo, cehat.

Some health experts stress the need for using local expertise and avoiding funds from foreign agencies. "The work is supported by international agencies which get access to information about the country even before we get it," says Chandrakant S Pandav, head, Centre for Community Medicine, All India Institute of Medical Sciences, Delhi. That's some food for thought.