Lowest bid in second batch of solar energy projects was for Rs7.49/unit

The way the Jawaharlal Nehru National Solar Mission is making progress, it is expected that solar energy will soon be as cheap as energy from conventional sources. At least, that is what emerged from the second batch of bidding under the National Solar Mission held on December 2 for 350 MW capacity. The lowest bid was for Rs7.49 per unit, which is 50 per cent lower than the benchmark tariff of Rs15.39/unit fixed by the Central Electricity Regulatory Commission (CERC).

Bidding became, as expected by some, very fierce and the lowest bid of Rs7.49 per unit was made by Solairedirect India, a subsidiary of a French company. Green Infra Solar made the last highest successful bid at Rs9.44 per unit.

B Bhargava, director with the Ministry for New and Renewable Energy (MNRE), says this is a big step towards grid-parity (parity with tariff for energy supplied through the national grid) for solar energy in India.

The average price for the winning bids came to Rs8.78/KWh. The lowering of bid prices could be because the price of solar modules, which make up 50-65 per cent of the cost of a solar power project, have fallen continuously since 2008. Gaurav Sood of Solairedirect India says his company will opt for “crystalline technology from a domestic producer and the plant will be set up in Pokhran area in Rajasthan”.

On path to achieving grid-parity

During the bidding itself, A K Maggu, additional general manager in charge of the solar mission at NTPC Vidut Vyapar Nigam (NVVN)—the nodal agency—stated that some developers might complain about low margins. “But the Indian model of bidding has been adapted by many other countries, we have heard that California is following our example. We are lowering the price of solar power rapidly.”


A large majority of the project developers opted for Rajasthan; just two projects are proposed in Maharashtra (25 MW total) and only one project each in Tamil Nadu (10MW) and Andhra Pradesh (20 MW) (see chart below). One unnamed bidder says, “Rajasthan is perfect for solar power, the (solar) radiation is great.”

Other successful bidders in batch II include Azure Power India, which took home 35 MW of capacity at a discounted tariff of Rs8.21 per unit. 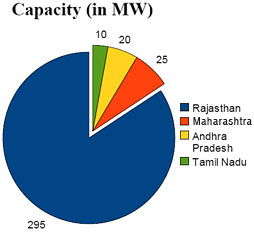 When asked whether the bid price is'nt too low, Inderpreet Wadhwa of Azure Power India responded: “No, not at all, this is where prices are in Europe.” Azure Power uses US Manufactured thin-film solar panels and is financed by the US Exim Bank and the International Finance Corporation (IFC). Down To Earth (DTE) has earlier reported on the import of solar equipment under the national solar mission.

On the other hand, Bhavana Gupta, project coordinator of Sky Energy—one of the bidders who did not succeed—says, “these people (successful bidders) ruined the bids, they will not be able to run the projects at these rates.”

There are, however, steep fines if a company does not finish its project in the allotted 13 months from the date of signing the contract. A substantial bank guarantee has to be given, which is taken away gradually over a period of three months if a project is delayed. Depending on project cost, the penalty, by way of loss of bank guarantee, would make up 24 to 43 per cent of the cost for bidders giving the highest discounts while for projects giving discounts in the lower range, the penalty would amount to 17 to 30 per cent. For the first batch of PV projects, the deadline is January 9, 2012. So, stakeholders will soon get to know whether the fines are high enough to coax the developers into meeting project deadlines. DTE had earlier reported that some projects may be delayed. Alex Spectrum Radiation, which had not started working on its project even by mid-October (with a deadline of January 9, 2012), took part in the bidding but was disqualified as it failed to furnish some original documents along with the bid.

Many of the larger players in solar were completely absent—Tata BP Solar put in no bid and Lanco Solar made an unsuccessful bid under the name Omega Solar Projects.