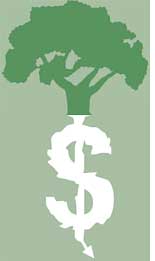 GDP does not calculate the wealth of ecosystems and biodiversity

Human well-being is completely dependent on the smooth flow of ecosystem services, such as food, fibres, clean water, healthy soil and carbon capture. They are public goods, but with no market and no prices, and hence are rarely detected by the economic compass of our times, gdp

The world has achieved economic progress. But over the past 50 years its ecosystems have degraded by about 60 per cent. For example

In the past 300 years, the global forest area has shrunk by 40 per cent

In the past 108 years, the world has lost 50 per cent of its wetlands

In the past 20 years, 35 per cent of mangroves have disappeared. In some countries it is up to 80 per cent

Some 30 per cent of coral reefs --which have even higher levels of biodiversity than tropical forests--have been seriously damaged through fishing, pollution, disease and coral bleaching

The world's biodiversity and ecosystems are being exploited at an unsustainable rate, which has started showing socio-economic impact. Recent evidence of climate change suggests much faster and deeper impact than previously predicted, including the risk of human conflicts caused by competition for biodiversity resources and ecosystem services

Further decline is projected over the coming decades because of population growth, changing land use, economic expansion and global climate change

Under current practices, meeting the food needs of growing populations will further threaten biodiversity and ecosystem services. Based on population projections alone, 50 per cent more food than currently produced will be required to feed the global population by 2050

One academic study estimated the economic value of ecosystem services at US $33 trillion, compared to US $18 trillion for global GDP

Between 2000 and 2050, it is estimated that each year ecosystem services with a value equivalent to about us $78 billion will be lost from land-based ecosystems alone

The distribution challenges of this biodiversity loss are particularly nerve-wracking because those who have largely caused the problems--the rich countries--are not going to suffer much, at least not in the short term

Subsistence farmers, fishers and the rural poor face the most serious risks from degradation. This imbalance is likely to grow

Source The Economics of Ecosystems and Biodiversity. The report was presented at the Ninth Conference of the Parties to the Convention on Biological Diversity in Bonn, Germany on May 29, 2008.