No life loss has been reported in India yet 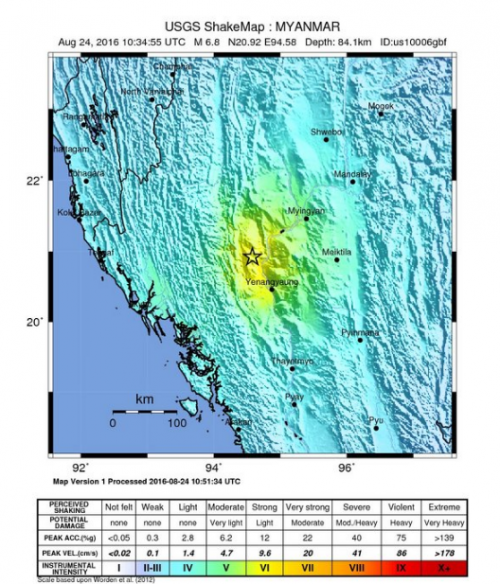 An earthquake of magnitude 6.8 on the Richter scale struck Myanmar at around 4 PM IST on Wednesday. The tremors were felt in east Indian states of Bihar, West Bengal, Assam and others. Tsunami alert has not been issued after the quake.

No casualty has been reported in India yet. Metro services in Kolkata have been temporarily suspended after tremors in the region, say media reports.

The quake shook buildings in Myanmar's Yangon and other cities, as per local media reports. Office buildings in the Thai capital of Bangkok were also shaken.

The USGS estimated that the impact would be "relatively localised" but noted that many buildings in the region are "highly vulnerable" to earthquake shaking.

Earthquakes are relatively common in Myanmar, though the country has not seen a major quake since 2012. The last major quake struck in a nearby region in April and caused minor damages but no casualties.

Earthquakes in Myanmar occur due to the collision between the Indian and Eurasian plates in the Indo-Burmese Arc.

While the Chauk earthquake was of intermediate depth (between 70-300 km), shallow ones (depth less than 70 km) occur in the Indo-Burmese Arc on Sagaing, Kabaw and Dauki faults. Between 1930 and 1956, six M7.0+ earthquakes occurred near the Sagaing Fault, resulting in severe damage in Myanmar including the generation of landslides, liquefaction and the loss of 610 lives.

Deep earthquakes (depth greater than 300km) have also been known to occur in this region. These are thought to be due to the subduction of the India plate. However, whether subduction is currently active or not, is debatable.

A study published in Nature Geosciences in July this year warned of a massive earthquake lurking beneath fault slips in Myanmar. It attributed the stress in the region to a subduction zone, where one section of earth’s crust, or tectonic plate, is slowly thrusting under another. All of earth’s biggest known earthquakes occur along such zones, such as the Indian Ocean quake and tsunami that killed some 230,000 people in 2004, and the 2011 Tohoku quake and tsunami off Japan, which swept away more than 20,000 and caused the Fukushima nuclear disaster.

Lead author of the study, Micheal Steckler, geophysicist at Columbia University’s Lamont-Doherty Earth Observatory, said the strain between the plates has been building for at least 400 years. When an inevitable release comes, the shaking is likely to be more than 8.2, and could reach a magnitude of 9, similar to the largest known modern quakes, said Steckler. “We don’t know how long it will take to build up steam, because we don’t know how long it was since the last one. We can’t say its imminent or another 500 years. But we can definitely see it building,” he said.