California’s burning woods are an alarm US can’t ignore

May to October is the wildfire season in California when windy conditions and low humidity act as dry fuels for forest fires. Credit: Coast Guard Compass

Picture this. An area more than double the size of Maldives has been burning for six consecutive days. Large swathes of northern California, the Golden State, are now shrouded in ashes as they witnessed one of the deadliest cases of wildfires, killing at least 38 people, destroying 190,000 acres of land and completely ravaging more than 3,000 homes across Sonoma and Napa County. The death toll now exceeds that of the 1933 Griffith Park fire in Los Angeles—one of the deadliest wildfire incidents in California’s history.

‘Diablo’ wind—the hot and dry offshore wind that blows from the northeast California during spring and autumn— is believed to have fanned the fires at a frantic pace. On the evening of October 8, when the fire was first reported, the winds were gusting at a speed of up to 70 miles per hour (110 km/h).

Just like wildfire, these winds (similar to Santa Ana wind in Southern California) are a legacy that California lives with. Diablo is formed when cold air from high-pressure areas in Nevada and the Great Basin warms as it moves toward the coast where lower atmospheric pressure prevails. The wind also loses humidity in the process. It is this hot and dry wind that turns even small blazes into devastating ‘firestorms’.

This state in the west coast is no stranger to wildfire, with May to October being the wildfire season when windy conditions and low humidity act as dry fuels for forest fires. However, there are few factors that have made the latest event overwhelming. 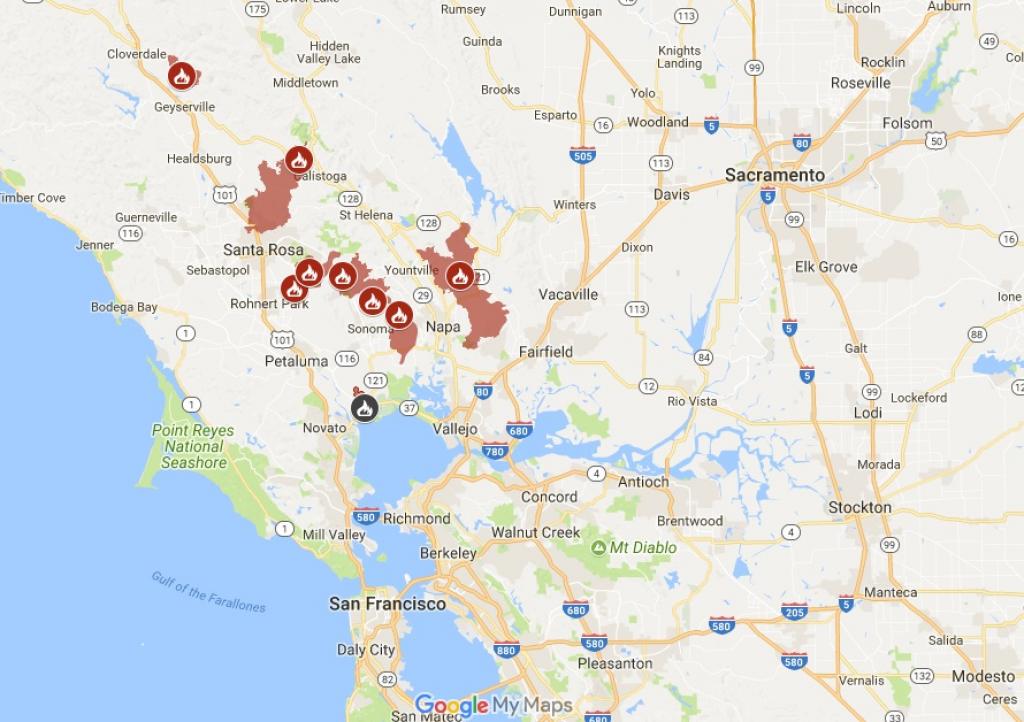 California has been already reeling under six consecutive droughts since 2011. It had seen below average rainfall in the last 10 of the 11 seasons before 2016. While heavier than normal rain last winter created overgrown forests, the dry spell turned green bushes and trees into tinder. The prevailing dry conditions have sucked in the moisture from plants, leaving behind dead branches and logs.

Moreover, record high temperatures had made forests bone dry, an ideal condition for fires to spread. For example, Sonoma County, which sustained the most damage, recorded temperatures around 109 °F (42.7°C), with the town of Sonoma sweltering at 115°F (46°C) just weeks before the incident. Even downtown San Francisco, which is lot closer to the sea, experienced heat wave with mercury touching 106 °F (41°C). The city was never this hot in almost 150 years of record keeping.

This emerging trend of a long spell of drought and a very wet winter points to the increasing extreme weather conditions—a direct consequence of decades of carbon emissions.

A part of the blame should also go to the state for allowing more and more buildings in hilly areas adjacent to brush and woodlands.

Air quality gets a beating

Currently, the city of Napa has the most polluted air in the country, according to the Environmental Protection Agency. Its air quality index has been hovering between 160 and 170 for the past few days, while zero to 50 is considered good air quality. Napa is followed by cities such as Oakland and San Francisco that reported bad air quality.

Going by the media reports, the smoke from the wildfires has travelled about 100 miles from the fire zones.

In the midst of all this, the irony has not escaped people’ attention. The state, which is facing the double whammy of floods and wildfires, is probably the most proactive state when it comes to taking climate action. Despite the climate denial discourse being predominant in Washington, this western state is becoming a model for other states by taking decisive steps on energy and other factors exacerbating climate change.

In fact, only few days after the fire broke out last Sunday, Governor Brown established a wood smoke reduction programme to help people of California make the transition to cleaner and healthier heating.