Climate change, poor planning: Why Assam’s floods are getting worse

The current spate of floods in Assam claimed 71 lives and affected nearly 3.2 million people in 32 districts 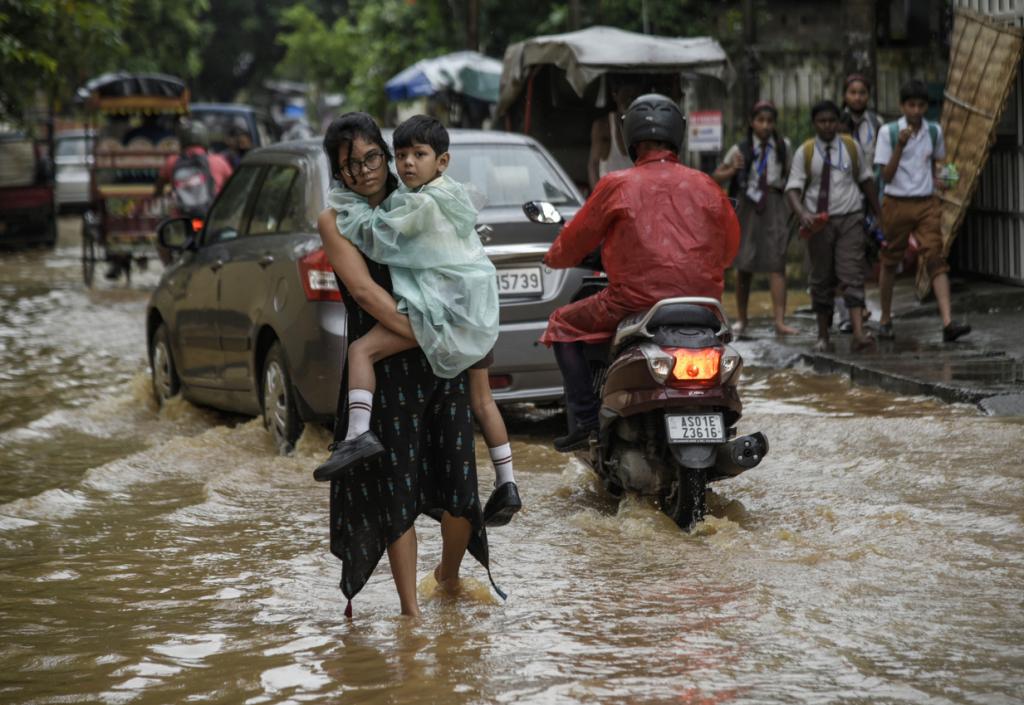 Four days ago, residents of northern Assam’s Darrang district woke up to stormwater gushing into their homes and blocking their exit from every corner.

The district is the point where many tributaries of the Brahmaputra river merge into the main channel from Bhutan in the north.

Nripen Nath, a resident of Basachuba village in the district, recollected flash floods from Brahmaputra had submerged the area around his residence in May following a spell of rain. But the rainfall this month was more intense than anything he had seen before, he said.

It rained for days at a stretch and embankments on both sides of the tributaries were breached, drowning villages on both sides, said Nath, who is in his early 40s. “Even the elevated areas of my home are knee-deep in water. There is no potable water to drink for four-five days since the tubewells and toilets are submerged.”

Like Nath, residents of more than 80 villages near the embankments stretching 10-15 kilometres south along tributaries such as Barnodi, Nanoi and Satkola river and the Brahmaputra channel were met with the unexpected floods that had a debilitating effect on their lives and livelihoods.

So far, only the Brahmaputra would overrun, and not its smaller tributaries, they pointed out.

This was completely out of the blue, said Nath. “We didn’t get time to make arrangements for our livestock, crops and fisheries.”

Keeping his two cows and three goats in houses on stilts is also not a solution, he said, since it is difficult to feed them and there are fears of disease outbreaks.

Nath relies on his animals for meat, apart from the extra income from his fisheries, which fetches him around Rs 1 lakh a year. Due to the flooding, his fish have escaped into the floodwaters.

Strange actions at a distance

The current spate of floods in Assam claimed 71 lives and affected nearly 3.2 million people in 32 districts, according to official records.

The continued spell of heavy showers offered no respite — the state recording 53.4 mm of rainfall as of June 19, 2022. The cumulative rainfall in the first 12 days of June was 528.5 millimetres of rainfall — an excess of 109 per cent.

Meghalaya, Earth’s wettest region, recorded 1,215.5 mm of rainfall this month as of the 19th, resulting in 185 per cent excess rainfall.

A combination of La Nina in the Pacific and a negative Indian Ocean Dipole in the Indian Ocean has strengthened the winds blowing from the southwest to the northeast (southwesterlies) in the Bay of Bengal.

“These strong monsoon winds in the Bay of Bengal can now carry much more moisture than ever before, in response to global warming,” he said.

The volume of atmospheric moisture increases with rising temperature because warmer air holds more moisture and for longer, he explained. “Hence, the large amount of rainfall that we see now might be a climate change impact.”

These winds dumping rains over Bangladesh and northeast India have been exceptionally strong for a week now, the scientist added.

An embankment that was reconstructed after getting damaged in the floods in May was breached again this time, Nath said. Companies who are awarded contracts to build embankments by the government profit from these back-to-back destructions, he added.

A total of 297 embankments have been breached in 20 districts of Assam, with 33 in Darrang alone, according to the Assam State Disaster Management Flood Report of June 19, 2022.

“Only 7 per cent of the districts have updated their disaster management plans (DDMP) until 2020 in Assam, according to our analysis,” said Abinash Mohanty, programme lead of the risks and adaptation team at the CEEW, a Delhi-based think-tank.

Ensuring updation of the DDMPs and, more importantly, its practical implementation can help manage floods better, he added.

Embankments have been known to mess with the environment of the floodplains. These walled structures affect natural spillage of the rainwater to the ground to the lowest point on the river. This results in tributaries not being able to drain water into the river and subsequent water-logging.

With the state struggling to soak up more than 53.5 mm of rainfall in a day and village habitations inundated and tributaries overwhelmed, Assam’s preparations for such chronic flood events have come under radar.

The issue with flood management at the global level is the exclusive focus on technocentric engineering structures such as embankments which uses up a chunk of the state exchequer, he added. “Embankments are a temporary solution and they are as good as their management.”

The government should bring the flood-affected people into the policy discourse and focus on making their lives flood-proof, said Choudhury.

The northeastern regions are becoming increasingly fragile due to the exponential rise in climate extremes, said Mohanty.

Various government departments such as animal husbandry and agriculture should work towards intensive use of resources during the non-flood months, said Choudhary. “These include shifting livestock earlier or ensuring no spread of diseases so that during floods, there is no lingering concern on this end.”

The most the government is doing is investing in rescue and relief measures when floods take place, he added.

Plans for urgent interventions at the policy cycle also moves on with mitigation limited to structural ways to tackle floods, which is significantly not enough with extreme events on the rise.