Cyclone Fani: Artisans to fishermen, trail of devastation has left none

A fisherman stands near his damaged boat in Penthakata village. Photo: Ashis Senapati

It's been 10 days since Odisha was violently shaken by Cyclone Fani. The state remained busy throughout last week, limping back to normalcy, trying to put back fallen electricity poles and removing uprooted trees. Now, it is time to take stock of lost livelihoods and how to put people back to work.

The cyclone damaged weavers’ looms, betel vineyards, craftsmen’s tools, trees and fishermen’s boats; it left agricultural fields inundated. Down To Earth has already reported on the woes of handloom weavers of Kendrapada and paan — betel leaves — growers. The problem is more widespread; so much so that Chief Minister Naveen Patnaik had to announce a special package on May 11, 2019.

The Odisha government undoubtedly succeeded in saving its people from the second-most powerful cyclone in the state’s history — Fani. But, most of them, though survived, are not left with any means to sustain themselves.

Chief Minister Naveen Patnaik, in his relief package, has offered Rs 15,000 to 5,000 farmers and women self-help groups for betel vine cultivation. He has also promised farmers an agricultural input subsidy of at least Rs 2,000 on perennial crops and Rs 1,000 on other crops.

Another source of livelihood and state heritage destroyed by the tropical cyclone is Pattachitra, the art of traditional scroll painting. After Fani ravaged Raghurajpur, a crafts village 14 kilometres from Puri, 160 families of artisans returned to rain-soaked pattachitras and broken stone sculptures.

“Raghurajpur is a heritage crafts village, known for its master Pattachitra painters. The art dates back to 5th century BC. The village also hosts Gotipua dance troupes, a precursor to Odissi,” said 51-year-old Brundaban Swain, an artisan in the village.

Pattachitras and other works of art worth Rs 10 crore were damaged in the natural disaster risking the fate of artisans in the village. “When Fani hit our village, it took away everything. For nearly four days after the cyclone struck Raghurajpur, the village and adjoining areas were inaccessible,” added Swain.

The artists are more worried because they have nothing to sell at the famous Rath Yatra that is less than two months away.

Even the wood apple paste, which they call kayantha, used to paint will be difficult to source after the storm uprooted almost all wood apple trees in the region. 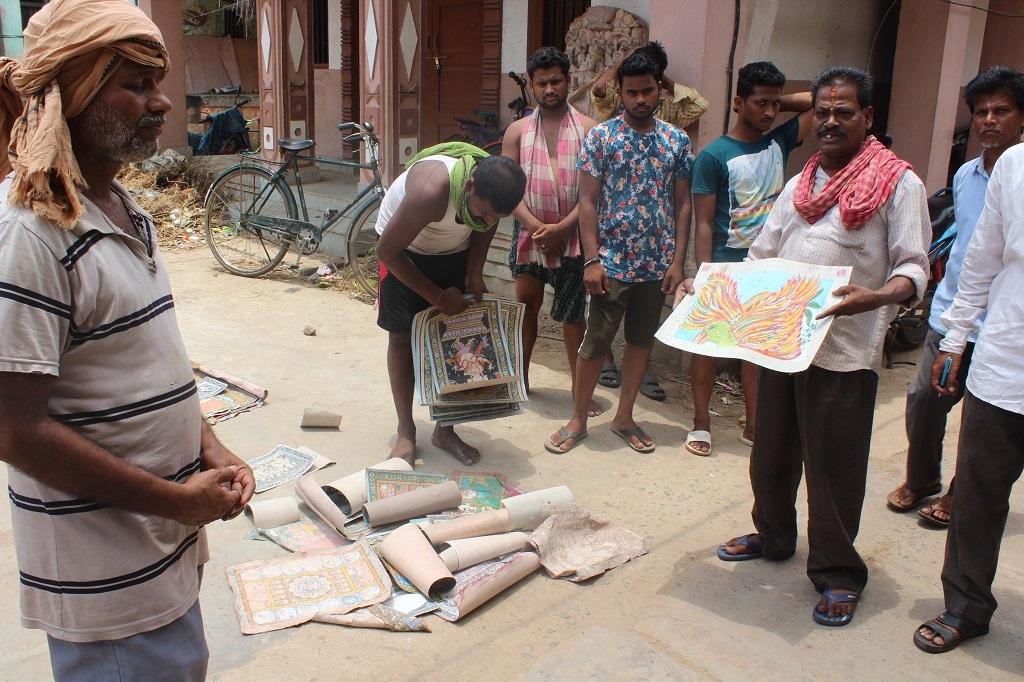 CM Patnaik has promised Rs 4,100 to every artisan for replacement of their tools and Rs 4,100 for loss of raw materials. His relief package also includes finished goods for 70,000 artisans.

“The state government has announced a Rs 1,600-crore relief package for the livelihood of cyclone-hit people. We have also sent a team to Raghurajpur to get a detailed report on the loss the artisans have suffered,” said Utkal Kumar Pati, joint director of the state tourism department.

Like handicraft, handloom weavers too are terribly hit. About 1,200 families, who were dependent on weaving, now stare at an uncertain future in Kendrapara district. With an increase in powerlooms and automation, handloom weavers were anyway struggling. Fani may have just pushed them off the edge.

Fani has ruined the state government’s plan to produce 113.19 lakh square metres of textile and handloom products worth Rs 223 crore this year. The CM has promised the handloom sector the same financial assistance as the handicraft sector.

One of the worst-hit professions is fishing, which runs around six lakh households in Odisha. OF them, two lakh have been affected. More than 11,000 fishing boats anchored along the coast were damaged by the cyclone. So the fishermen are left without any houses or boats.

“Many fishing boats collided with each other and many fishing vessels were tossed up by the storm,” said Prasan Behera, secretary of Odisha Traditional Fish Workers’ Union.

But the government’s ban on fishing saved their lives while rending them jobless. “The government had imposed restrictions on fishing by mechanised fishing vessels between April 15 and June 14 in the state to conserve fish stocks during breeding period. The 60-day ban made several fishermen decide to go to their hometowns leaving behind their fishing boats and nets in Odisha’s coastal hamlets. So when the storm made landfall it damaged the boats,” said P Apara, a fisherman of in Penthakata village.

The state recently announced a compensation of Rs 9,600 for each damaged boat and Rs 2,600 for fishing nets.

“This amount, which is yet to be disbursed, is very low and will not cover the cost of even minor repairs,” said M Suribaba, an affected fisherman.